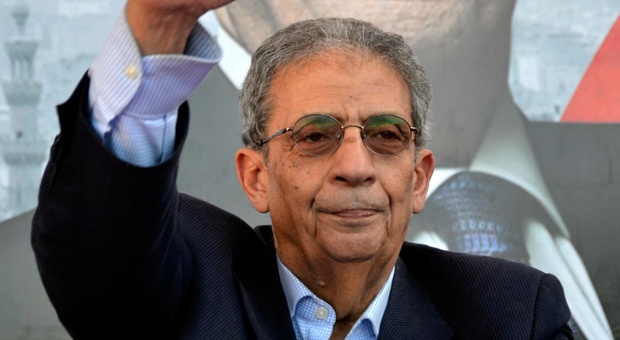 Former presidential candidate and Chairman of the Constituent Assembly Amr Moussa praised Hamdeen Sabahy’s announcement that he would run for president.

“I express my appreciation for the bold decision of… Hamdeen Sabahy to run for the presidency in the next election,” said Moussa in a Monday press statement.

The former foreign minister said Sabahy’s candidacy “now opens the door for a competitive electoral battle that supports the democratic process advocated by the 25 January Revolution… and 30 June.”

Moussa added that in light of the “grave situation gripping the country and the urgent need to begin the process of rebuilding Egypt”, the upcoming presidential elections would be a “battle about the future of Egypt” and choosing a president who “can bring stability and improve the management of the country”.

The former Arab League secretary-general approved of a political arena in which candidates from “various orientations” would compete for the “highest office in Egypt”, saying it was in the country’s best interest.

Moussa, who has also welcomed the possibility of Minister of Defence Abdel Fattah Al-Sisi’s candidacy, was the chairman of the committee that was tasked with amending the 2012 constitution.

Moussa was also a candidate in the 2012 presidential elections, finishing in fifth place in the first round of the poll. Sabahy finished in third place in the same elections. The two are also leading members of the National Salvation Front, which was formed in November 2012 and has organised demonstrations against ousted president Mohamed Morsi and the Muslim Brotherhood.