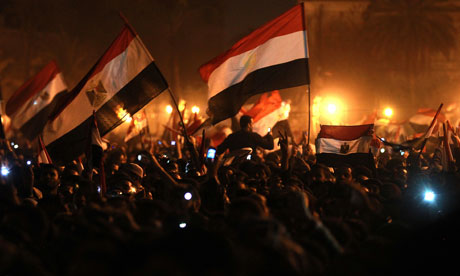 The Anti-Coup Alliance released a statement via Facebook Monday calling for marches in the heart of Cairo and vigils in front of embassies and consulates that support the interim government. The marches and vigils are being held to commemorate the third anniversary of former president Hosni Mubarak’s ouster.

The statement calls for support against the “single entity” of Mubarak and Field Marshal Abdel Fattah Al-Sisi, whom they accuse of reversing the gains made during the original 25 January Revolution that ousted autocrat Mubarak.

The statement calls for supporters to “move together to complete the revolution,” creating what it calls the “necessary climate” to achieve all the objectives of the 25 January Revolution.

The statement calls for supporters to use “creative” means of resistance in the heart of Cairo and throughout the country, calling for an intensification of activities throughout the day.

The statement does not list specific starting places for marches or specific locations for vigils.

The Anti-Coup Alliance released locations and times for 36 marches supporting ousted president Mohamed Morsi on the third anniversary of the 25 January Revolution. Most of these marches were broken up while protesters were still gathering.

The Muslim Brotherhood was listed as a terrorist organisation on 25 December 2013. Taking part in a march can result in a five-year prison term, while organising a march can lead to a death sentence.

The Ministry of Interior also announced recently that investigators are using social media sites, such as Facebook, to track the “digital fingerprints” of anyone who incites violence against security forces or even organises a march.

At least ten people have been arrested by the interior ministry for messages they have posted to Facebook.