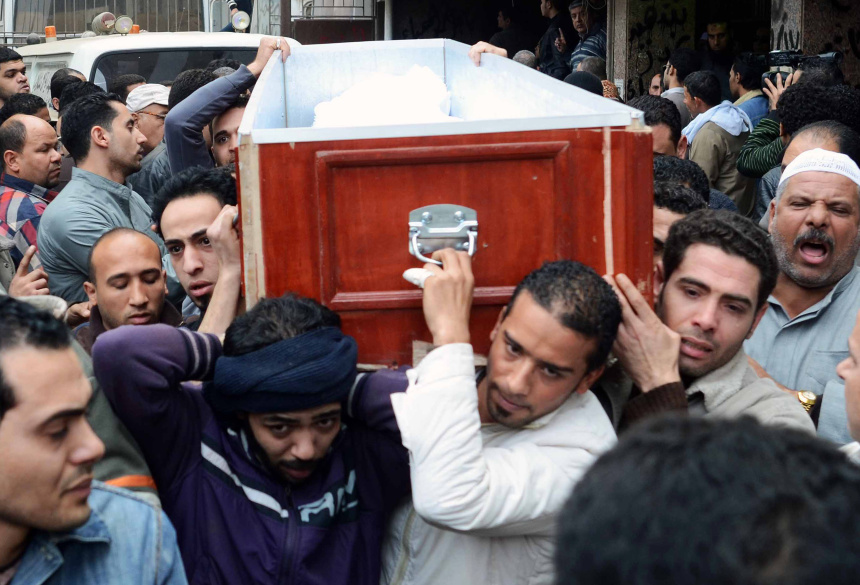 Egypt’s death toll for the first month of 2014 is 265, including 108 killed on the 2011 revolution’s third anniversary, according to the independent statistical database Wiki Thawra.

The number is almost double the official death toll for the revolution’s anniversary, which stands at 66, according to Forensics Authority Spokesman Hisham Abdel Hameed.

The third anniversary of the 25 January Revolution saw some of the worst violence in Egypt since the forced dispersal of two pro-Mohamed Morsi sit-ins in August 2013, which Human Rights Watch called “the most serious incident of mass unlawful killings in modern Egyptian history.”

Throughout January, 198 people were killed in political clashes, 29 in military campaigns conducted in an effort to combat terrorism, 28 as a result of terrorist operations (including 22 security officials), 5 due to excessive use of force by security officials, and 4 inside detention facilities, according to Wiki Thawra. The independent statistical database reported that 18 were killed on 14 and 15 January during the constitutional referendum, while Hameed said the death toll did not exceed nine.

According to Wiki Thawra’s report, 5,074 people were arrested in January; 390 arrests followed the issuance of arrest warrants. Among those arrested, 2,075 were arrested during clashes between civilians and security forces, 1,662 while dispersing protests, 51 during public assemblies held without prior notice and 35 while dispersing sit-ins. The revolution’s anniversary alone witnessed the arrest of 1,366.

By comparison, the Ministry of Interior announced it had arrested 1,079 during the revolution’s anniversary.

Wiki Thawra also reported the arrest of 677 during the two-day referendum in January.

Wiki Thawra was established by a group of independent youth. Its data mainly depends on reports by independent civil society organisations including the Egyptian Centre for Economic and Social Rights (ECESR), the Hisham Mubarak Law Centre (HMLC), and the Front to Defend Egypt’s Protesters (FDEP).