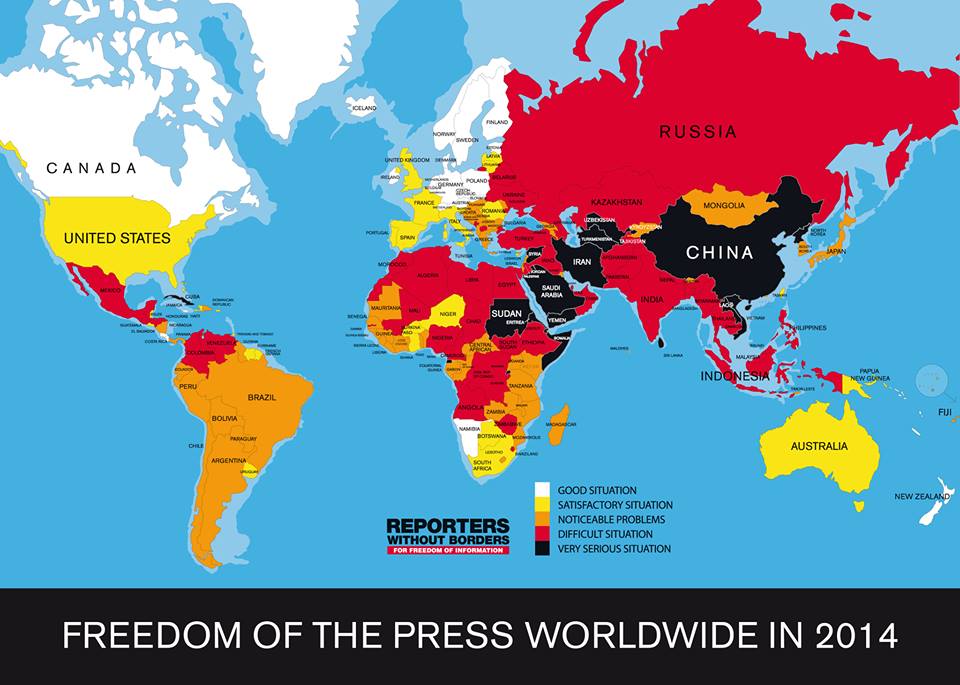 The annual report, released by media watchdog Reporters Without Borders, ranked Egypt as 159th out of 180 listed countries in the 2014 World Press Freedom Index, echoing criticism from local and international media watchdogs and rights groups, which have repeatedly condemned the treatment of journalists in recent months.

The appointment of Muslim Brotherhood supporters to state-owned newspapers had “a big effect on their editorial policies,” according to the report. “At the same time, there was a big increase in lawsuits and physical attacks against journalists.”

After a July 2013 power struggle swept Defence Minister Abdel Fattah Al-Sisi into power, the media underwent a “Sisification”, Reporters Without Borders reported. During the second half of 2013, five journalists were killed. At least 80 have been arbitrarily detained by police or demonstrators.

New authorities have systematically targeted foreign and Egyptian media affiliated to the Muslim Brotherhood since the ouster of president Mohamed Morsi, according to the report.

The report said an “anti-Brotherhood witch-hunt is under way that targets not only Egyptian journalists but also their Turkish, Palestinian or Syrian colleagues.” This “persecution violates provisions” in the 2014 Constitution.

It stated that Qatari-based news network Al Jazeera “has been particularly targeted”. The network is largely viewed by Egyptians as being sympathetic to the Brotherhood. Twenty journalists – nine of whom are employed by Al Jazeera – will go on trial on 20 February, facing a litany of charges relating to terrorism and spreading false news. The charges have drawn widespread international condemnation.

Press freedom watchdog the Committee to Protect Journalists (CPJ) issued a report Tuesday detailing the extraordinary hardships faced by journalists working in Egypt in 2013. The scathing report indicts both the Morsi administration and the military-backed government that deposed it for making Egypt an inhospitable environment for journalists.

On 31 January, the UN Human Rights Office said it is “extremely concerned about the increasingly severe clampdown and physical attacks on media in Egypt.”

In 2013, Egypt was one of the top ten jailors of journalists in the world, according to the CPJ census of imprisoned journalists. CPJ ranked the country as the third deadliest country for journalists in 2013.

Number one on the World Press Freedom Index is Finland, and the 180th Arabic countries have ranked lower than Egypt, such as 163rd on the list Bahrain, 164th Saudi Arabia and 177th.