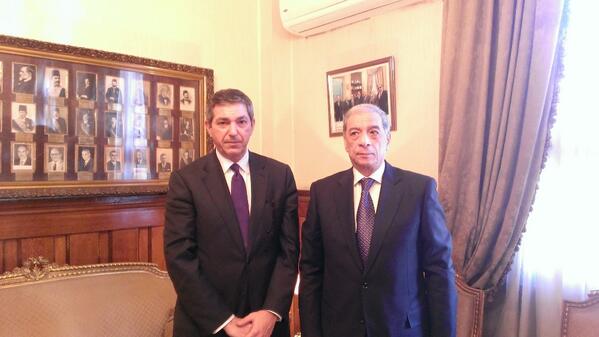 Lambrinidis described the refusal as a “direct contradiction” to the Ministry of Interior’s “press release promising greater openness to such visits,” in a tweet.

Amid mounting allegations of torture inside prisons and places of detention, the Ministry of Interior issued a statement Tuesday welcoming requests from NGOs wishing to visit prisons.The ministry denies any wrong doing.

Ahead of his meeting with Barakat, Lambrinidis met with Interior Minister Mohammed Ibrahim Tuesday to discuss torture and detention conditions. He also addressed the “overpowering police response to protests” and the arrests of peaceful political activists, journalists and human rights defenders.

The Ministry of Interior said after the meeting that Ibrahim said, “there is no truth at all” to reports of torture inside prisons. Ibrahim addressed the efforts taken by the ministry to “combat acts of violence and terrorism” and its respect of fundamental principles of human rights.

Ibrahim called on Lambrinidis to consider the human rights of policeman when discussing matters related to human rights in general.

Lambrinidis relayed the European Union’s condolences for the deaths of policeman as well as the deaths of over 1000 protesters. “Killings must stop. Accountability for excessive force is key,” he said.

Lambrinidis is currently on a visit to Egypt and has met many ministers, religious figures and civil society members.

He discussed the importance of human rights in diffusing tensions and enhancing security in Egypt with Pope Tawadros II and held talks with Grand Imam of Al-Azhar Ahmed Al-Tayeb.

He held an open discussion with 30 rights lawyers and advocates from 12 local and international NGOs earlier this week. Lambrinidis said after the meeting, the Egyptian government must respect peaceful free expression and human rights communities.