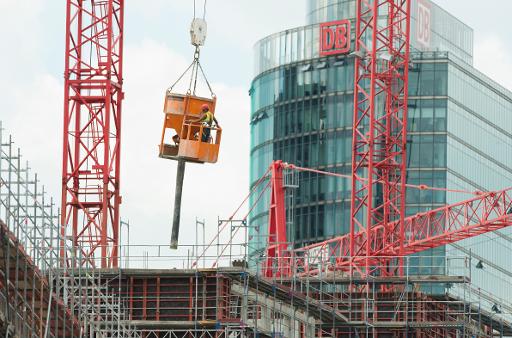 AFP – The eurozone economy showed on Friday enough of improvement in the fourth quarter to suggest a modest recovery remains on track but problems remain, notably near-record unemployment and deflation risks.

The single currency bloc grew 0.3% in the fourth quarter of 2013, at the top end of forecasts, after it nearly stalled in the third when it expanded just 0.1%.

“While still far from dynamic, it was a step back in the right direction,” said Howard Archer at IHS Global Insight.

At the same time, the outcome still left the eurozone in negative territory for the year, shrinking 0.4% in 2013, Archer noted.

The eurozone escaped a record 18-month recession in the second quarter last year with growth of 0.3% but data since then has been very mixed, sparking concerns the recovery could run out of steam.

Friday’s figures are reassuring on that count.

Not only the core countries led by Germany did well but “encouragingly, there were further signs of improvement in the long-suffering struggling southern periphery countries,” Archer said.

There, Spain grew 0.3% while Italy made it into positive territory with 0.1%, the first time it has done so since second quarter 2011, he noted.

Germany showed a gain of 0.4% in the October-December period, better than analyst forecasts of 0.3%.

In contrast, the French economy grew 0.3% in the fourth quarter but this was short of official forecasts of 0.4%.

Non-euro Britain expanded 0.7%, compared with 0.8% in the third quarter, as it continued one of the stronger performers.

Martin van Vliet at ING Bank said it was positive that for the first time in nearly three years, the top six eurozone economies all expanded, setting a lead for others to follow.

But despite figures suggesting “the recovery picked up some further steam in the first part of this year, a sustained recovery unfortunately is not yet assured,” van Kliet said.

“Crucially, economic growth now has to start feeding through into decent jobs growth, which in most countries still is the missing link in the recovery,” he said.

Archer, while highlighting the gains, made a similar point.

“It is still going to be far from plain sailing for the eurozone in 2014 as a number of significant growth constraints remain,” he said.

Among the headwinds, he cited tight government spending and credit conditions, high unemployment and weak consumer demand, which appears to “have been generally lacklustre.”

With eurozone unemployment running at a near-record 12%, consumer demand is understandably weak and it is also creating a new problem – deflation risk.

Eurozone inflation has fallen steadily in the past six months, to 0.8% in December then 0.7% in January, way below the European Central Bank target of near 2.0%.

If consumers believe prices will fall further, they put off purchases which in turn prompts companies to cut investment, hitting jobs, wages and then demand in a vicious circle.

International Monetary Fund head Christine Lagarde warned recently “that with inflation running below many central banks’ targets, we see rising risks of deflation, which could prove disastrous for the recovery.”

For Christian Schulz at Berenberg Bank, the fourth quarter showed that the eurozone was leaving the debt crisis behind and was moving steadily into growth, helped by exports and investment.

This shows “the eurozone is well on track towards a much healthier foundation for future growth,” Schulz said.