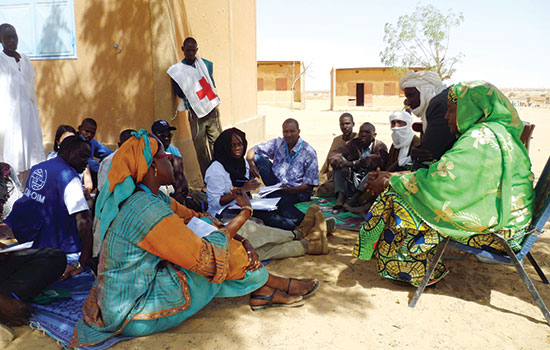 On a breezy Monday night last November, UN Secretary-General Ban Ki-moon arrived on a visit to Mali, the first leg of a four-nation tour of the Sahel region. Much had changed in the country’s fortunes. Not long ago, many considered Mali a beacon of stability and a model of democratisation. Under its blue sky, it exuded a sense of serenity.

Now, even to the casual observer, the mood has turned sombre. And it is not only because of the lingering clouds of smoke oozing from burning mountains of trash near Bamako, the capital. In reality, a series of dramatic events in the recent past are mostly to blame. A military coup toppled an elected government in April 2012. Armed groups took over the country’s north. A coalition of terrorists boldly attempted a total take-over of the country. At the last minute, French and Chadian soldiers forcefully stopped the terrorists’ advance. Peacekeepers were soon deployed. A presidential election took place this past July. It was the first step in getting a derailed democracy back on the tracks.

However, less than 48 hours before the UN chief landed in Mali, assailants killed two French journalists in the northern town of Kidal. Ghislaine Dupont and Claude Verlon, reporters with Radio France International, had been kidnapped and shot dead in the space of a few hours. Mr Ban, French officials and the UN Security Council strongly condemned the killings. The secretary-general said that they were a reminder of the challenges facing Mali and the need for action to support its people. Across Mali, the commotion over the journalists’ deaths was palpable.

As Mr Ban set foot in the region, he quickly moved to set the stage too. First, he stressed that he was visiting the region for the very first time, along with top officials of partner institutions. “A dream team”, one diplomat suggested. Among the visitors were Nkosazana Dlamini-Zuma, chairperson of the African Union Commission; Jim Yong Kim, president of the World Bank; Donald Kaberuka, president of the African Development Bank; and European Union Development Commissioner Andris Piebalgs. Ibrahim Mayaki, chief executive officer of the New Partnership for Africa’s Development, later joined the group.

Shortly after his plane had landed, in front of a packed crowd that had come to greet him at the airport, Mr Ban insisted: “We have come here to demonstrate our solidarity with the people of Mali and Sahel.” Those words were central to his message over the next three days of his visit.

A UN strategy for the Sahel

The events of the past two years in Mali have been central to the design of a unique initiative, now formally known as the UN Strategy for the Sahel. This is a broad and far-reaching response to the region’s woes. Its purpose is to mobilise both the countries of the region and their international partners to find common and coordinated solutions. It focuses on three main areas: governance, security and resilience. The plan reflects the belief that peace and development are interconnected. “One is not sustainable without the other,” Mr Ban has said on many occasions.

It was therefore apropos that the secretary-general started his Sahel tour at a gathering of the region’s ministers in Bamako. Ibrahim Boubacar Keita, the recently elected president of Mali, had convened the meeting to serve as an initial platform for the implementation of the strategy.

“Now is the time for action,” Mr Ban urged the audience, adding that action can and must be regional in scope “since the challenges facing the region respect no boundaries.” The Sahel is Africa’s most vulnerable region, where some 11 million are at risk of hunger while facing threats from terrorists and criminal networks. Referring to the delegation travelling with him, Mr Ban remarked: “We have partnered together in this extraordinary way because we recognise that the Sahel region needs an extraordinary effort.” Mr Kim, head of the World Bank, said Mr Ban had brought “multilateralism to a level never reached before”.

Among the ministers from Sahel countries and the heads of international institutions, there was consensus at the meeting that the UN strategy was timely and critical. After the Security Council’s endorsement of the Sahel plan in July, the region and its development partners adopted it.

The day before the meeting, in an unusual show of partnership, through a press release issued in Bamako on behalf of all the major visiting international partners, the European Union and the World Bank pledged over $8.2bn to the region: the Bank pledged $1.5bn in new regional investments over the next two years, while the EU announced it would provide €5bn ($6.75bn) to the six Sahel countries over the next seven years. The money is to be used for a number of development projects, including agriculture and green energy.

From a formal gathering with officials, the secretary-general headed north for a visit to the fabled city of Timbuktu, which has suffered the wrath of terrorist occupation and lost some of its historical treasures while its people endured, as Mr Ban put it, “horrendous human rights violations.” Mr Ban said that when Timbuktu’s heritage was attacked, it was not a loss only for the Malians, but also for common world heritage.

Support for Sahel’s women and girls

Having set the tone for his visit in Mali, the secretary-general proceeded to deliver the same message, emphasising specific aspects, during subsequent stops. First, the next day, in the hot and dry weather of Niamey, Niger’s capital, the secretary-general applauded President Mahamadou Issoufou for his support in improving the status of women and girls through concrete action.

“When we give women the education they deserve, society becomes stronger. When we protect women’s human rights, society becomes more just. And when we allow women to determine their own future, they will advance development for all,” Mr Ban declared at a ceremony titled the Call to Action on Demographic Issues. Much like the other officials, Ms Dlamini-Zuma of the African Union Commission joined in encouraging countries of the Sahel to do more for their women and girls. “They are not only half of the society, they also gave birth to the other half,” she quipped—to general applause—from a stage that resembled a set for American politicians’ debates during electoral campaigns.

Calling for common action in Niger, a country facing unique threats as a result of regional instability originating in Mali, Libya and Nigeria, and suffering the brunt of the region’s recurring food crisis, was preaching to the converted. The UN chief told an extraordinary session of Niger’s parliament later in the day that the region needed to confront armed conflict, political instability and economic development, not as isolated and unrelated problems but in a comprehensive way. “Our United Nations Integrated Strategy for the Sahel is based on identifying crucial connections—and supporting your efforts to drive hard at them with well-coordinated solutions,” the secretary-general further explained.

As in Mali, the secretary-general and his delegation were warmly received in Burkina Faso and Chad, the last two stops on the agenda. With visible pride, Djibril Bassole, Burkina Faso’s foreign minister, quickly pointed to the fact that “never before have we seen such an important delegation come to visit us”.

The UN chief expressed his gratitude for Burkina Faso’s role in addressing some of the region’s most pressing challenges. By serving as mediator in a number of crises in West Africa, including in Mali, Burkina Faso has earned itself an enviable reputation as a peace broker, he said. “You play an active role in the Sahel,” Mr Ban told government officials in the capital Ouagadougou, following a meeting with President Blaise Compaoré.

The secretary-general also pledged the continuing support of the UN and the international community as the country works to achieve the Millennium Development Goals by 2015, contribute to defining the Sustainable Development Goals and address the impact of climate change.

A few hours later, in N’djamena, Chad, Mr Ban applauded the country’s positive role in the Sahel region, particularly in confronting terrorists in northern Mali. He acknowledged Chad’s contribution to the UN peacekeeping operation deployed there and the sacrifice made by the 39 Chadian peacekeepers who have died in the region. “We came to the region to continue and amplify our joint action,” the UN chief added at his last press conference on the trip.

On yet another breezy night in the Sahel, after some 72 hours of meetings, discussions and visits, and even as his “exceptional delegation” had started making its way back from the region, the secretary-general remarked, “Our journey of solidarity with the people of the Sahel can and must continue.” As he had told his audiences all along the way, he again added: “Now is the time to act.”