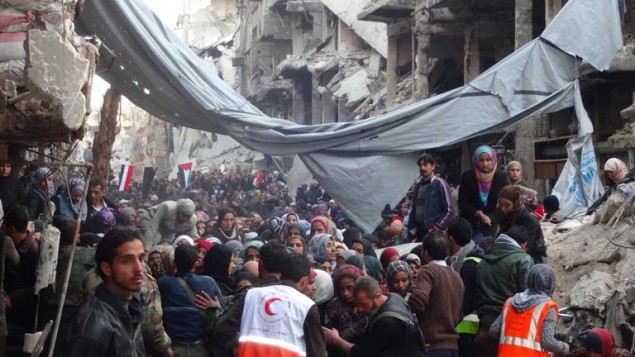 AFP – Most of the Syrian opposition fighters in the Palestinian Yarmuk camp in southern Damascus have now withdrawn, a Palestinian official told AFP on Sunday.

Anwar Abdel Hadi, an official with the Palestine Liberation Organisation, said “most of the gunmen have pulled out of the camp” after an agreement with Palestinian factions in Yarmuk.

“Palestinian fighters have deployed to the outskirts of the camp to prevent the entry of any non-Palestinian gunmen,” Abdel Hadi added.

Yarmuk camp was once home to some 150,000 Palestinians, as well as Syrian residents.

But large parts of the camp have been destroyed by fighting and many residents have fled, with just 18,000 left behind and under a tight army siege imposed after rebels took control of the camp.

Last month, Palestinian factions negotiated a deal under which the UN agency for Palestinian refugees UNRWA was able to begin distributing some food aid to remaining residents, and around 1,500 civilians were evacuated.

The distributions ground to a halt on 8 February, after fighting broke out in the camp the night before.

But the withdrawal of most of the rebel fighters could pave the way for a loosening of the army siege, which led to the deaths of at least 88 people from hunger and lack of medical care, according to one NGO.

Abdel Hadi said a Palestinian delegation would tour the eastern part of camp on Sunday “to ensure it is free of gunmen.”

He added that an engineering team would enter the camp within the next 24 hours to clear explosives and mines so that debris could be removed and people could begin to resume normal lives.

“Humanitarian aid can resume immediately after these processes are completed and state institutions return to the camp,” added Abdel Hadi.

The deal does not specifically call for the state services like the police and postal service to return to the camp, but Abdel Hadi suggested that was likely after opposition fighters withdrew fully.

“When this happens, there may no longer be a need for the humanitarian aid because people will be able to move around freely,” he said.

On Saturday, UNRWA urged renewed access to Yarmuk, warning the supplies it had delivered would now be running out.

“We have not distributed food there over a week now which is potentially life-threatening for the besieged civilians trapped by the conflict,” UNRWA spokesman Chris Gunness said.

“The United Nations must have secure, substantial and sustained humanitarian access to the besieged civilians of Yarmuk.”