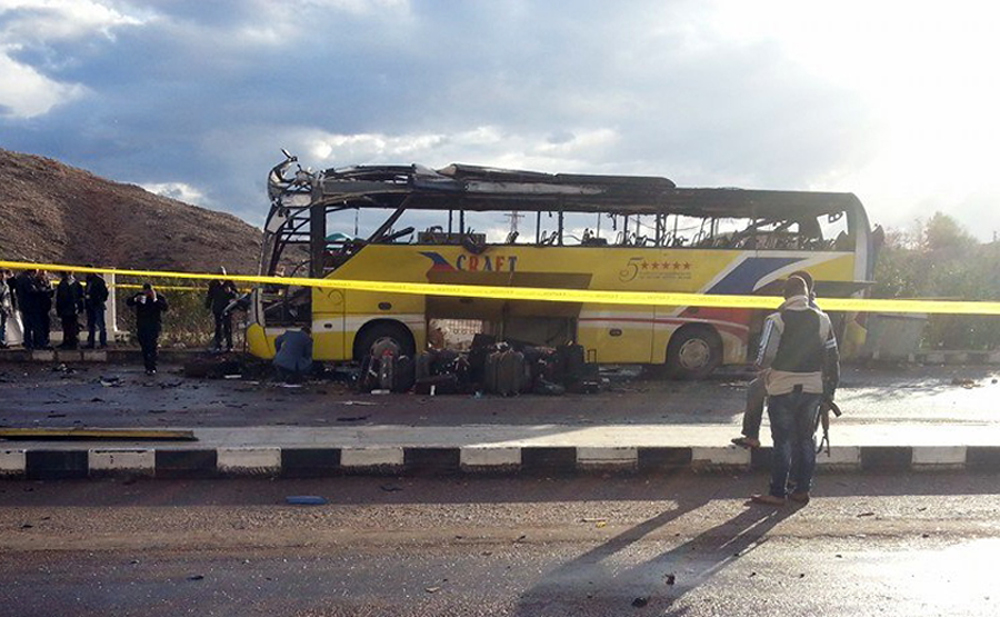 The Ministry of Interior suspects that the explosion on a tour bus on Sunday may have been carried out by a suicide bomber.

A source from the ministry told Daily News Egypt that eyewitnesses claim to have seen a man enter the tour bus before the blast that killed four people. The source stressed that it is not yet clear if the man who boarded the bus left before the bomb exploded. It is thought the driver, who is among the deceased, was loading bags onto the bus while the suspect boarded the bus.

South Korea expressed its “outrage and resentment” over the deaths of three of its citizens in the blast. Seoul has also warned its citizens against travelling to the Sinai Peninsula.

The explosion also claimed the life of the Egyptian driver and left 13 Koreans and three Egyptians injured, according to the Ministry of Health.

“Most of the injuries are due to the fragments from the explosion,” said Ministry of Health Spokesman Ahmed Kamel, adding “some patients have fractures in the lower limbs.” He confirmed that two patients require surgery to reset broken bones and stressed that all are in a stable condition.

Minster of Health Maha Rabat visited Taba, accompanied by Minister of Tourism Hisham Zaazou, visited the injured in the Sharm El-Sheikh International Hospital. The ministers also met with the Deputy Korean Ambassador and the Governor of South Sinai Khaled Fouda resulting in all parties agreeing to exert “all necessary measures to transport the injured and their families to their home country following their treatment” as well as transporting the bodies of the deceased, according to a statement circulated on Monday.

Kamel confirmed that none of those injured were transported to Israel for treatment saying the Egyptian Ambulance Service were on the scene quickly as the explosion occurred some 50 metres from their station.

Seoul issued a special travel alert “on the inland areas of the Sinai Peninsula and the coastal areas of the Gulf of Aqaba,” placing the areas under the category of “restricted travel”. The statement called on South Korean nationals “to pay special heed to their safety and head to a safer country as soon as possible” given the circumstances.

Spokeswoman for the Ministry of Tourism Rasha Azazy told Daily News Egypt, “there is not one single place on the planet that is 100% safe.” She pointed to terrorist attacks in London, New York and Madrid, adding “we are trying our best to up security and the Egyptian government is doing its best to protect Egyptians and tourists alike.”

David Barnett, a research associate at the Foundation for Defense of Democracies, who focuses on Salafi jihadists in the Sinai Peninsula and Gaza Strip, said: “There had been little indication from jihadists in recent months that tourists were going to be directly targeted. Since the uptick in violence post-Morsi, security sites and personnel have been the primary target for jihadist groups like Ansar Beit Al-Maqdis.” He added that the Sinai based militant group “has recently spoken of striking economic interests of the current regime, so tourism could fall into that realm.” Barnett said it is “too early” to determine if attacks on tourists could be an emerging trend “as not enough information regarding the attack or the perpetrators is currently known.”

An official from the office of the spokesman for the armed forces said the military does not have jurisdiction in Taba, but said  the “security situation in Sinai is fine” saying the last attack was the shooting down of a helicopter at the end of January.

Minister of Foreign Affairs Nabil Fahmy spoke with his South Korean counterpart Yun Byung-se by telephone on Sunday. Yun requested for “the Egyptian authorities to investigate the case in a prompt and thorough manner,” according to the Korean ministry statement.

The bombing, that has yet to be claimed by any group, has been widely condemned both domestically and internationally. Prime Minsiter Hazem El-Beblawi conveyed his condolences on Monday and said he is expecting a report on the situation from Zaazou on his return to Cairo. Egypt’s Grand Mufti Shawqy Allam described the incident as an “evil sin”.

The Muslim Brotherhood joined those condemning the attack in the “strongest possible terms,” describing it as “cowardly”. The Salafi Al-Watan party, a member of the Anti-Coup Alliance, also condemned the attack.

Tourism represents a large sector of Egypt’s economy, but the industry has taken a down turn since the 25 January revolution contributing to the overall ailing of Egypt’s economy. At the start of February Zaazou said he expected the number of tourist arrivals to Egypt will increase by 3 million during 2014.

This is the first attack targeting tourist areas since a 2009 attack on Cairo’s Khan El-Khalili in which a French schoolgirl was killed. Attacks on Sinai resorts such as Sharm El-Sheikh, Taba and Dahab claimed the lives of dozens in the 2000s. An attack in Luxor carried out by Al-Jamaa Al-Islamiya killed over 60 tourists in 1997. The group has since renounced violence as a form of political gain.