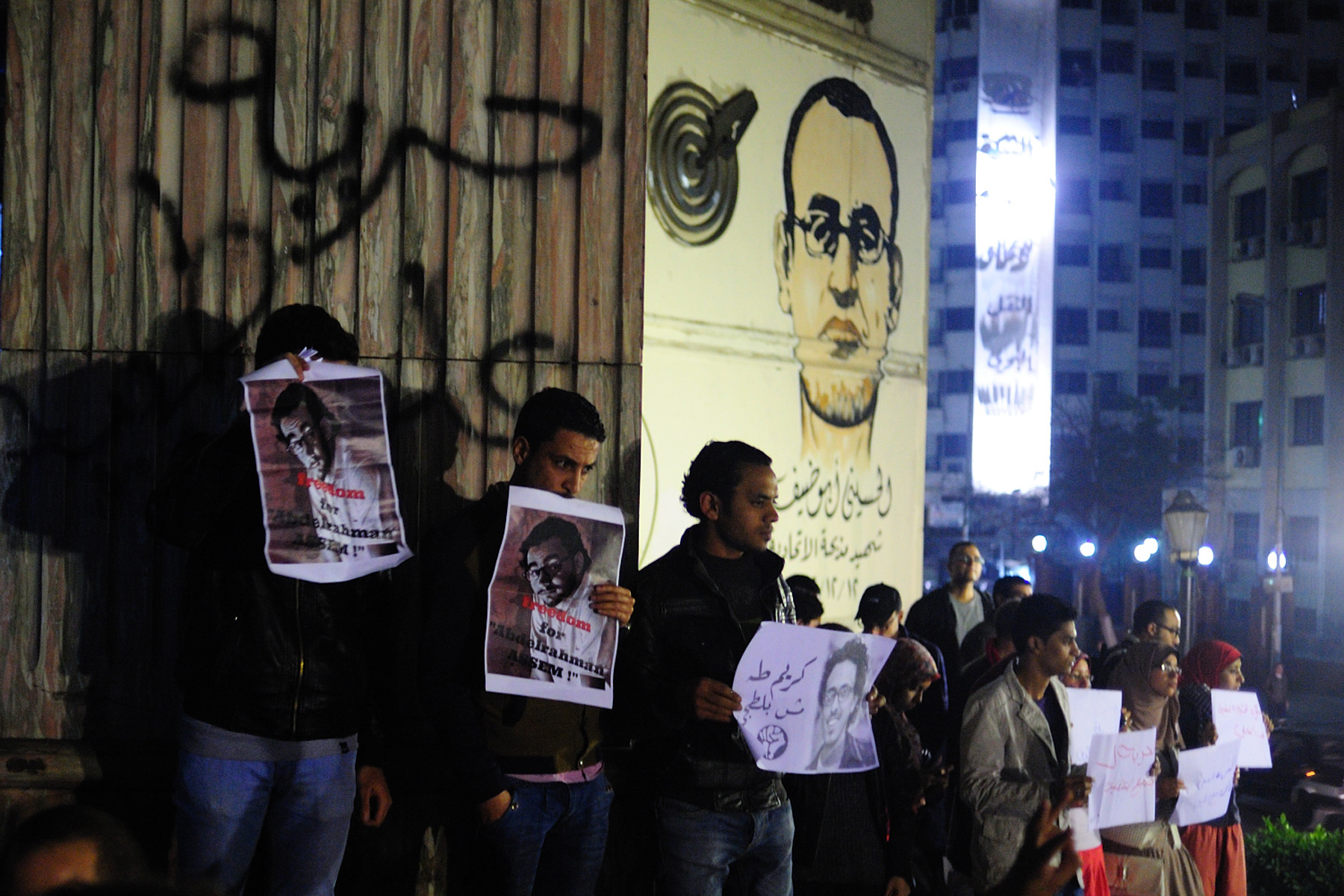 The Freedoms Committee in the Press Syndicate hosted a press conference on Sunday evening titled Freedom for the Brave. There, eleven youth groups signed a statement condemning the illegal detention of 22,000 people, many of them youth, who were arbitrarily arrested and are facing human rights violations in police stations and prisons.

Khalid Abdel Hamid, a member of a group called Freedom for the Brave which calls for the release of detainees, said: “The current regime is oppressive just as its predecessors. We condemn any human rights violations to any Egyptian disregarding political affiliations.”

Ragia Omran, a member of the National Council of Human Rights said that security apparatuses are uncooperative with the council. Omran added that the council has documented several testimonials of torture from detainees, including those in Abu Zaabal prison, where they have attested to being beaten and tasered, along with other violations.

A protest took place outside the Press Syndicate after the press conference was done. The youth groups called for a peaceful human chain on October Bridge on 25 February to call for the release of all detainees.

Daily News Egypt spoke to those who were recently released as well as some of the families of the detainees.

Hany El-Fouly spent the afternoon of 25 January studying in his late father’s office. While on his way home, he was arrested by plainclothes policemen on Adly Street in Downtown Cairo. He says he was then taken to the Jewish temple in downtown where he was tortured along with other detainees for two hours. Some of the detainees were electrocuted, and all were beaten badly.

Hany was then transported to Abdeen Prison where the detainees were tortured for two straight days. Eventually the detainees were put into a vehicle and told they were being released, but in reality they were taken to Abu Zaabal prison. There, they were beaten periodically for the first two days, before starting a two-day hunger strike to protest their conditions.

At Abdeen, El-Fouly was kept in a 16 metre cell with 75 detainees. They had two holes to use as a bathroom and were barely given food or water. In Abu Zaabal, he was in a cell with 30 other people, and although the cell had running water, the detainees never saw the sun and never got exercise.

El-Fouly said all the men he shared a cell with were arrested in a similar fashion. He added that “freedom feels good after witnessing 75 people sharing one loaf of bread, a bottle of water.”

El-Fouly added that this experience showed him how people can help one another to survive.

Twenty-four -year-old lawyer Ahmed Holayel was on his way with his friend Moataz Mohamed on 25 January to see their friend Sayed Wezza who was shot and had been transferred to Ahmed Maher Hospital. Moataz was arrested by police officers in plainclothes and taken to an Abdeen police checkpoint.

Holayel went to ask for his detained friend and showed his lawyer’s syndicate identification to a police colonel, who proceeded to order his arrest as well. Holayel and Moataz were handcuffed and taken to Abdeen Police Station where they were shackled and interrogated by Homeland Security.

Holayel says they were kept in a 70-metre cell along with 75 inmates for 15 days at the Central Security Forces Camp in Tura, where the prosecution interrogated them. After they had spent 24 hours “kidnapped”, Holayel and his friend Moataz were released EGP 10,000 bail on 12 February.

The mother of Fady Samir said her son, a 19 year-old student at Don Bosco Italian School, was handed to the police by street vendors in downtown on 8 January while on his way to take the metro. Following his arrest, he was moved from one police station to another,  and was beaten in Abdeen Police Station. Fady is currently detained in Qasr Al-Nil police station facing a number of charges among which “belonging to the terrorist organisation of the Muslim Brotherhood” despite the fact that he is Christian. Fady missed his midterms that were taking place during his arrest.

19 year-old Ibrahim is a home-schooled student and works at the Egyptian Company for Leather Industries “to assist with the family expenses,” as explained by his mother.

Ibrahim was arrested from Al-Horeyah public park near Opera metro station on 15 January, the second day of the referendum, and was taken to Al-Azbakeyah police station where he said he was beaten and tasered. He was charged with “obstructing the democratic process”, “hindering citizens from participating in the referendum”, “terrorising citizens”, “rioting”, and “attacking the police stations of Al-Darb Al-Ahmar, Qasr Al-Nil, and Al-Azbakeyah”.

Ibrahim along with 33 others are facing trial on 22 February.

Al-Azhar student Salsabeel Gharabawy was arrested inside Al-Azhar University on 30 December for having a first aid kit in her bag. She was detained for 45 days, during which she was sexually harassed several times, and underwent two pregnancy tests.

Thirty-one-year-old Mohamed Al-Baqer, a senior member of the Strong Egypt Party, was arrested by plainclothes police near the City Stars Mall at dawn on 25 January. Al-Baqer and his two friends were in their car when it was stopped and searched by police. They police found paperwork belonging to Al-Nadeem Centre for Human Rights and a poster that said “No to the Constitution”.

The police charged the friends with “joining a group working to disrupt the constitution and the law”. The men were moved to a 20-person cell with 80 other prisoners – both convicted criminals and political detainees.

Al-Baqer and his friends were moved to a cleaner, less crowded cell where he met a 17-year-old who was accused of trying to steal a tank. Eventually the cell was filled with 35 other detainees, who were beaten and abused by officers. At one point they were blindfolded and dragged into a room with a state security officer, where they were asked if they were at Rabaa Al-Adaweya Square (the site of sit-ins in support of former president Mohamed Morsi), and if they had taken part in marches. Again they were beaten.

The men had to pay bribes to the guards repeatedly, either to see family or to see their lawyers.

Al-Baqer and his friends experienced, in their own words, flagrant violations of human rights, extortion, robbery, everything contrary to rule of law.

Mohamed Shazly’s father holds a picture of his son at the time of his arrest. The 17-year-old high school senior was arrested on Road 9 in Maadi after attending a physics class on 25 January. A protest was taking place on the same street. Policemen in plain clothes arrested Shazly at gunpoint and took him to Maadi Police Station, and then to El-Marg Prison for four days where he was beaten. Several times, he was forced to drink water with detergents to make him throw up. When the prosecution appealed his release, Shazly was taken back to Maadi Police Station.

Friends of Tarek Mamdouh Ali made flyers calling for his release. The 21-year-old engineering student is a volunteer for a project that educates children in underserved villages. Ali was at Sherif Street in downtown Cairo buying materials for a workshop he planned to give in a village called Qala’an on the Red Sea, when he was arrested by residents and was handed to the police at Abdeen Police Station. He was taken to the CSF camp at Tura.

Tarek will be tried on 20 February for “disrupting the peace”, “protesting without a permit”, “belonging to the terrorist organisation of the Muslim Brotherhood”, “attempt to murder protesters”, among other charges.

The mother of Mohamed Ahmed Abdel Razek, a 22 year-old Faculty of Commerce student who was arrested on 25 January in front of the Press Syndicate on his way to see the doctor. Mohamed takes medicine to prevent clots in his leg and stomach and suffers from a hormone deficiency. Mohamed was taken to the Central Security Forces Camp in Tura for 15 days, he was prevented from taking his medication for the first 5 days. He started a two-day hunger strike with his fellow inmates after he learned that their detention had been renewed. He was then taken to Abu Zaabal prison where he awaits his court date Thursday.

The Ministry of Interior, however, denied torture allegations reported by those who had been preventively detained. In a statement released on Tuesday, the ministry expressed its readiness to receive complaints from inmates, adding it will look into such complaints and take “decisive measures” against all those who are found complicit in committing “violations or delinquencies”.