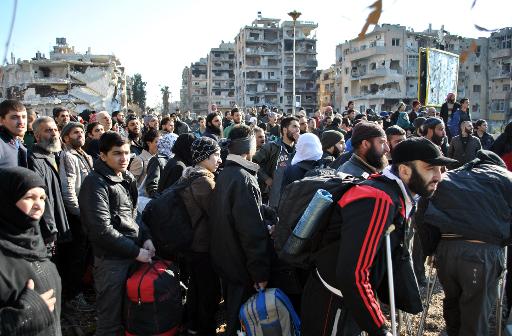 AFP – A new group of civilians has been evacuated from besieged parts of Homs after the humanitarian operation in the Syrian city was halted last weekend, Governor Talal Barazi said Wednesday.

The civilians, mostly women, children and elderly people, “have been evacuated from the besieged areas of the Old City of Homs,” Barazi was quoted as saying by Syrian state television.

The United Nations and Syria’s Red Crescent began operations to evacuate trapped civilians and deliver aid inside besieged parts of Homs on February 7.

The operation has allowed out some 1,400 of the estimated 3,000 people trapped in Homs for more than 18 months by a government siege that forced residents to survive on little more than olives and wild plants.

The work was made possible by a ceasefire that was extended twice, but expired on Saturday night.

Barazi had said Sunday that “armed groups” prevented the operation from resuming. It was not possible to confirm the claim.

Following their evacuation from the besieged neighbourhoods, around 400 men and boys aged 15-55 were detained by authorities for investigation upon leaving.

Barazi said on Saturday that 390 male evacuees had left Homs, with 211 released so far.

Last week the United Nations said 430 men and boys had been detained with just 181 released.

The fate of the male evacuees has prompted concern at the UN and the International Committee of the Red Cross, whose chief Peter Maurer warned Saturday that they “must be treated humanely at all times and be allowed to contact their families”.

Maurer also lamented the chaotic evacuation process, which saw aid convoys come under fire and shelling kill more than a dozen people despite the nominal truce.

The local truce in Homs came about despite the failure of the latest round of Geneva peace talks aimed at ending the nearly three-year conflict, which has claimed an estimated 140,000 lives.