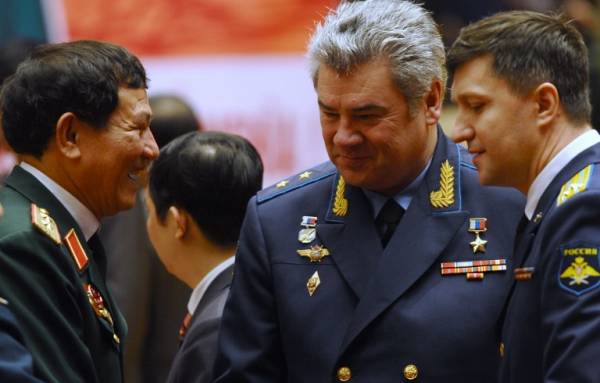 The head of Russia’s Air Force arrived in Cairo Tuesday as part of a delegation to meet with Egyptian officials about strengthening military cooperation between the two countries, according to state run Al Ahram.

Viktor Bondarev’s visit comes less than a week after Minister of Defence Abdel Fattah Al-Sisi and Minister of Foreign Affairs Nabil Fahmy travelled to Moscow to meet with their counterparts. The four ministers also held a four-way meeting, described as a 2+2 format, to explore ways of deepening relations.

The ministers’ visit resulted in an agreement for Russia and Egypt to cooperate in a variety of ways, including militarily, politically and economically.

Earlier this week Russia’s ambassador to Egypt said that more talks had been scheduled for March.

Speaking to state-run Al-Ahram, Fahmy said the relationship between Egypt and Russia is strengthening. He talked about the “bitterness” felt by Moscow towards former Egyptian regimes, lead by Anwar Sadat and Hosni Mubarak due to “the expulsion of experts” in 1972.

Reports of the finalisation of a weapons deal between the two countries emerged following the visit, as it did when the Russian ministers visited Cairo in November 2013. The reports of an arms deal came from anonymous sources inside the Russian defence ministry. In November, the Egyptian foreign ministry spokesman categorically denied the existence of any such deal.

Fahmy stressed that it is a “misconception” that Egypt’s discussions with Russia indicates that Cairo is distancing itself from The United States. The White House decided to suspend the delivery of military aid to Egypt, a decision that was rejected by Egypt.