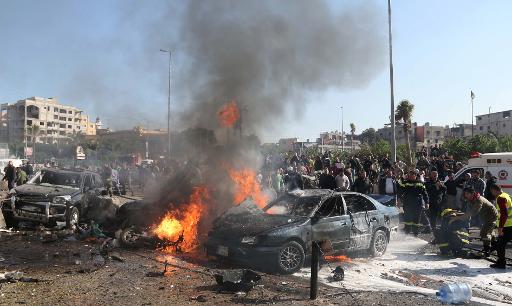 The attacks appeared to target the Iranian cultural centre, and an AFP photographer at the scene said the blasts had occurred beyond a security checkpoint at the centre, close to the building.

A security source confirmed that the attack involved two blasts, but could not confirm if the attacks were car or suicide bombings.

Red Cross Secretary General George Kettaneh said three people had been killed and at least 70 wounded, some in serious condition.

The explosions sent a large plume of smoke over the area and Lebanese television showed scenes of widespread destruction.

The arms of a wounded man hung limply off the sides of a yellow stretcher as he was carried from the scene.

The security official confirmed that the bombs had exploded near the Iranian cultural centre, in the Bir Hassan district of the capital.

Bir Hassan is surrounded by neighbourhoods that are strongholds of the Lebanese Shiite movement Hezbollah and have been targeted in multiple bomb attacks killing civilians.

Lebanon has been rocked by a string of car and suicide bomb attacks in recent months, many targeting strongholds of the Hezbollah movement in apparent retribution for its role in Syria.

The group has admitted sending fighters to the neighbouring country to battle alongside Syria’s President Bashar al-Assad against an uprising.

Iran’s official news agency IRNA too reported that the blast took place near an Iranian cultural centre as well as close to the Beirut offices of IRNA and Iranian television IRIB.

Bir Hassan has been the scene of blasts before, including a powerful double bomb attack against the Iranian embassy there in November that killed 25 people.

That attack was claimed by the Abdullah Azzam Brigades, an Al-Qaeda inspired group.

He said the bombings were a “message reflecting the determination of the forces of evil to harm Lebanon and its children and sow discord”.

“The message has been received and we will respond to it with solidarity and committment to civil accord and rallying around our army and our security forces,” he said in a statement.