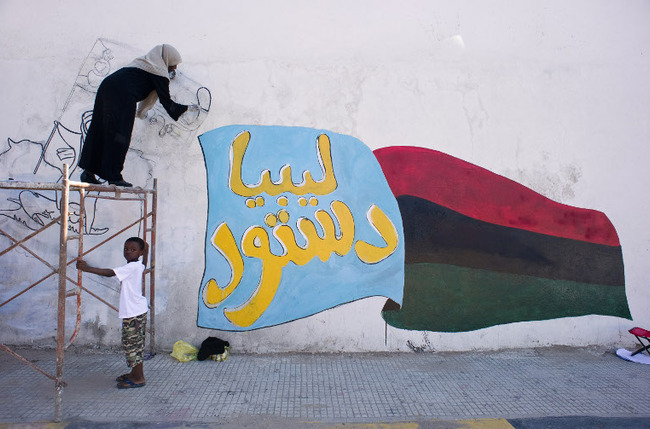 Reuters – Explosions rocked five polling stations in eastern Libya on Thursday as voters began electing a body to draft a new constitution, another step in the OPEC producer’s rocky transition since Muammar Gaddafi fell in 2011.

Nobody was wounded in the dawn bomb attacks in the restive town of Derna, residents said, but the incident highlighted the volatile situation in the North African country.

Prime Minister Ali Zeidan’s government is struggling to assert its authority over militias which helped topple Gaddafi but kept their weapons and have become major political players.

Two of the most powerful militias threatened on Tuesday to dissolve the General National Congress (GNC) assembly which they accuse of paralysing the country by endless infighting.

Libya desperately needs a viable government and system of rule so that it can focus on reconstruction and on healing the divisions exposed by the NATO-backed campaign against Gaddafi.

Polling stations opened across most of Libya, although they stayed closed in Derna after gunmen forced one voting centre to shut, an election official said. Security conditions meant some polling stations in two other towns also failed to open.

Nobody claimed responsibility for the Derna attacks but residents said the bombers had scrawled “There is no constitution but Islamic law” on a wall near the scene of one blast, suggesting radical Islamists were responsible.

“God willing this is the starting point for democracy and freedom, which is what we came for,” Hatem al-Majrisaid as he voted in Benghazi.

More than a million people had registered to vote, well below the almost three million who did so for the parliamentary election in 2012 – a sign of low trust in political institutions among Libyans emerging from four decades of quirky one-man rule.

Libya’s three regions of Tripolitania in the west, Cyrenaica in the east and Fezzan in the south, will have 120 days to draft the charter.

Libya used a similar model for the committee that drafted a pre-Gaddafi constitution implemented on independence in 1951.

The new constitution’s authors will need to take into account political and tribal rivalries, as well as demands for more autonomy for the east, when deciding what political system Libya will adopt. Their draft will be put to a referendum.

In the east, armed protesters have occupied major oil ports since the summer to demand a greater share of energy wealth and political autonomy, crippling vital oil exports. The protest group has dismissed Thursday’s vote as fake.

The election is also boycotted by the Amazigh, or Berber, minority which lives in the west near oil installations.

Its leader, Ibrahim Makhlouf, has rejected the vote because the Amazigh wanted a bigger say in the body and guarantees that their tongue will become one of Libya’s official languages.

In the past, Amazigh have backed their demands by blockading oil installations such as the Mellitah oil and gas complex, co-owned by Italy’s ENI, as well as pipelines.

Attempts to write a constitution have been delayed by political infighting in the GNC, elected in July 2012 for an 18-month term in Libya’s first free poll in nearly 50 years.

The GNC agreed this week to hold elections this year after an outcry over its plan to extend its mandate beyond Feb. 7.

Gaddafi ostensibly ruled Libya under a bizarre set of laws prescribed in his Green Book. In practice he and his family ran a totalitarian state where no political opposition was tolerated and rival tribes were paid off or played off against each other.