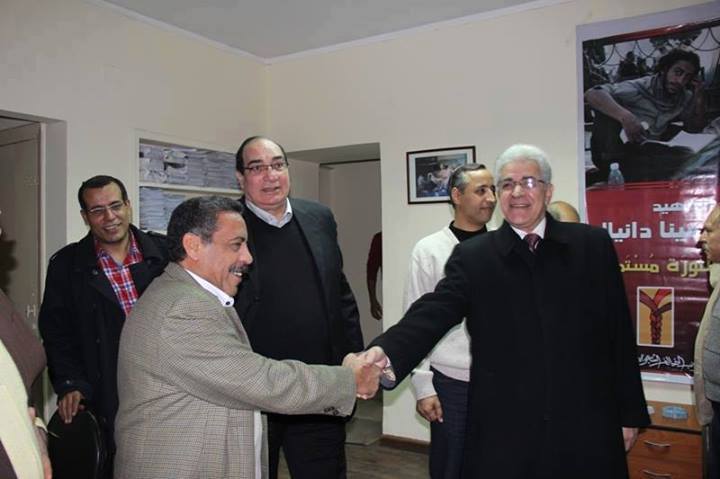 The meeting was organised by Chairman of the Social Popular Alliance Party (SPAP) Abdel Ghaffar Shokr.

Hossam Mo’ness, one of the coordinators of Sabahy’s presidential campaign and founding member of Al-Tayar Al-Shaaby (Popular Current), said both parties discussed in the meeting common ground as well as contentious points. Mo’ness added that Sabahy and Ali discussed the possibility of cooperation between the presidential campaigns of both.

While Sabahy announced two weeks ago that he will be taking part in the coming presidential race, Ali is yet to officially announce whether he will be running for the elections. Both participated in Egypt’s 2012 presidential elections, where Sabahy ranked third place after Egypt’s former President Mohamed Morsi and Ahmed Shafiq.

Mo’ness said that both parties also discussed the guarantees they shall pursue to ensure the integrity of the coming presidential elections.

“It’s likely that a group of political movements will come to a unified vision regarding such guarantees,” Mo’ness said.

On Wednesday, Sabahy also met with members of SPAP’s political bureau, including Shokr, alongside a delegation from the Al-Tayar Al-Shaaby movement to discuss the presidential elections. The meeting parties discussed possible steps to be taken following the presidential elections “in a manner which guarantees the achievement of revolutionary demands,” a statement from Al-Tayar Al-Shaaby read.

The movement cited Shokr saying he has invited Sabahy and Ali for a meeting “for consultation regarding Egypt’s future,” denying that the meeting’s objective was to make one potential candidate withdraw from the race for the sake of the other.

On Monday, Sabahy released his extensive political platform, which addresses a myriad of issues facing Egypt. The founder of Al-Tayar Al-Sha’aby presented his platform as three “pillars”: freedom enshrined by the democratic system, social justice achieved by complete development, and dignity preserved by national independence.

Sabahy was the first to announce his intention to run for the coming presidential elections.

Sami Anan, former Chief of Staff, announced on Sunday that he would also participate as a candidate in the upcoming elections. The general, who was deputy chairman of the Supreme Council of the Armed Forces (SCAF) during the in the post-Hosni Mubarak transition that began in 2011, was forced into retirement by former president Mohamed Morsi in August 2012.

Current Commander-in-Chief and Minister of Defence Abdel Fattah Al-Sisi, meanwhile, is yet to officially announce whether he will run for president. Amid speculation that Egypt’s top general would compete in elections, SCAF last month issued a statement saying that the council “could not help but respect the will of the broad masses in the nomination of Al-Sisi for presidency, which it considers a mandate and an obligation”.

The constitution dictates that Al-Sisi would have to retire from the armed forces before competing in presidential elections.