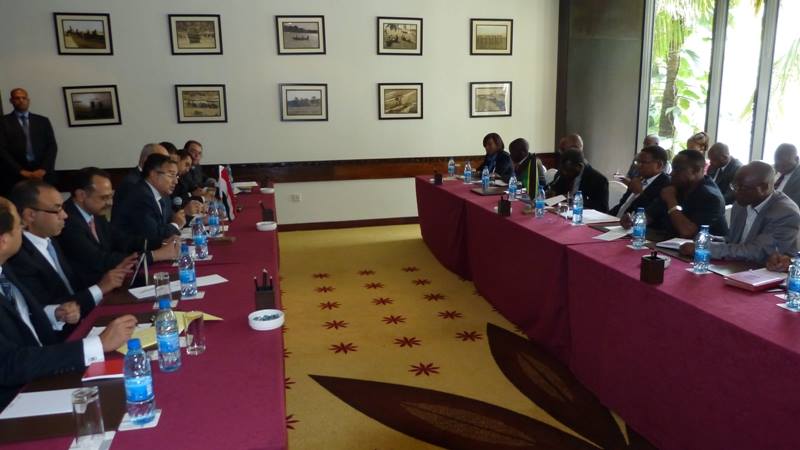 Interim Minister of Foreign Affairs Nabil Fahmy said the Nile River “should remain a source of cooperation and prosperity for the Nile Basin countries”, warning against the river becoming “a source of struggle and tension” during a meeting with his Tanzanian counterpart Bernard Membe on Friday.

Fahmy headed on Thursday night to the Nile Basin Countries of Tanzania and the Democratic Republic of Congo in a visit which reflects a “quantum leap” in Egypt’s relationship with the African continent, said Foreign Ministry Spokesman Badr Abdelatty.

Fahmy is scheduled to deliver a message from Egypt’s interim President Adly Mansour to the presidents of the two African countries. He will also head Egypt’s delegation to the Common Market for East and South Africa (COMESA) Trade Agreement’s 17th Heads of State Summit, scheduled to take place next Wednesday and Thursday in the Congolese Capital, Kinshasa.

The interim foreign minister’s visit to the Nile Basin countries features a delegation of Egyptian businessmen keen on pursuing private investments in the two countries in the fields of energy and transportation. The Ministry of Foreign Affairs said in a statement released on Thursday that such investments are “largely welcomed” by both Tanzanian and Congolese officials.

Earlier this week, Egypt’s Deputy Foreign Minister for the Water and Nile Basin Countries’ Affairs Mohamed Hamzawy met with a number of Egyptian businessmen who have investments or an interest to invest in African countries. The ministry said the meeting was part of Egypt’s efforts to “deepen its presence” in Africa, an inclination Egypt has adopted since the 30 June protests.

The Ministry of Foreign Affairs said the meeting included representatives from private corporations specialised in energy, infrastructure and transportation, adding that those sectors are among the priorities of the Nile Basin countries and East Africa. The Egyptian government is “keen on helping our African brothers fulfil their developmental needs,” the ministry said.

Ministry spokesman Abdelatty said that Egypt’s participation in the coming COMESA summit comes “amid a strategic vision which aims to strengthen economic and trade relations between the trade agreement’s 19 member-states.” He added that the theme of this year’s summit, Consolidating Intra-COMESA Trade through Micro, Small and Medium Enterprises Development, will open the door for COMESA member-states to make use of Egypt’s experience in this field.

During his visit, Fahmy is expected to meet foreign ministers of member-states scheduled to participate in the summit. The foreign ministry said Fahmy will be portraying Egypt’s vision for strengthening and developing relations with African countries as well as addressing the main regional challenges facing East and South African countries. The Nile water will be among the topics on Egypt’s agenda, the ministry added.

Egypt’s foreign minister said that both Egypt and the rest of the Nile Basin countries have growing needs for water, adding that such needs can only be met by mutual cooperation and “without harming the interests of Egypt”.

A dam Ethiopia is currently building on the Blue Nile, a major tributary to the Nile, has been a point of contention between Egypt and Ethiopia, as Egypt fears that it will have a detrimental effect on its share of Nile water. The Egyptian delegation to Ethiopia, headed by the water minister, failed to resolve “sticking points” following talks on the Grand Ethiopian Renaissance Dam last week.

Abdelatty pointed out that Fahmy’s visit comes in continuation to a tour the foreign minister began last September. He added that such efforts come in light of Egypt’s foreign policy following the 30 June protests in 2013: prioritising cooperation with the African continent.

In October 2013, Fahmy participated in a ministerial tour of Nile basin countries, which included Burundi, Uganda and the Democratic Republic of Congo. During the tour, Fahmy said that Egypt’s interim government is “re-positioning Egypt in its rightful place as a country of Arab identity and African roots”.

Egypt’s relations with African countries received a blow following former President Mohamed Morsi’s ouster in July, following which Egypt’s membership to the African Union Peace and Security Council was suspended. The ministry has repeatedly expressed its rejection of this decision.

Commenting on Fahmy’s expected tour and other visits to African countries, Abdelatty earlier said that such activities prove that the African Union’s decision is “wrong”.

The African Union’s decision was discussed during Fahmy’s meeting with Membe on Friday. Membe reportedly said that Tanzania will make use of its seat at the union’s Peace and Security Council to work on “restoring Egypt to its natural place and role” within the African Union.