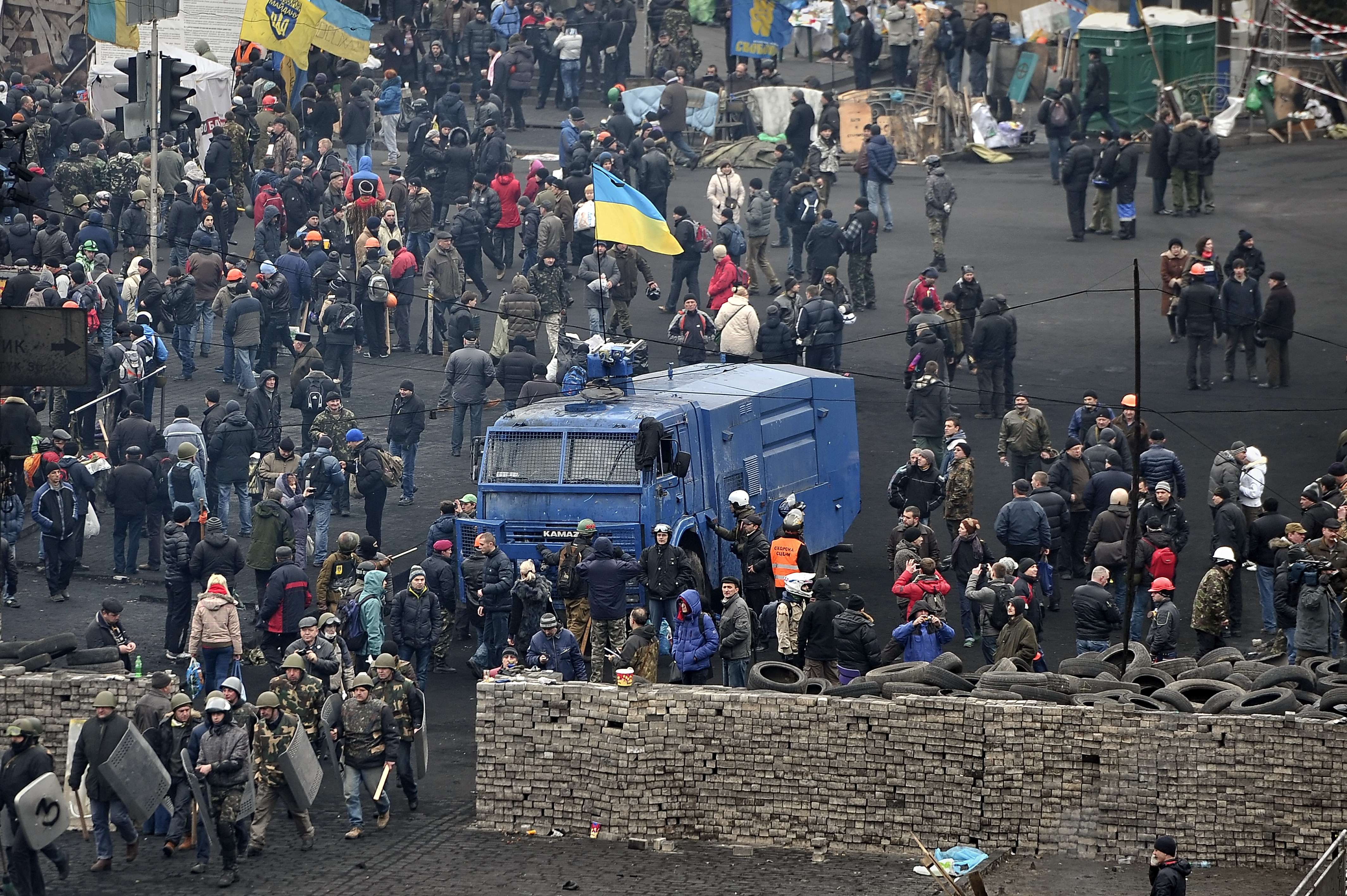 AFP – Militant anti-government activists in Ukraine on Saturday threatened to storm the president’s palace and shatter a fragile peace deal to end the ex-Soviet country’s bloodiest crisis since independence.

Embattled President Viktor Yanukovych signed a deal Friday with the opposition paving the way for early elections and forming a unity government while granting amnesty for protesters detained during three days of unrest that claimed nearly 100 lives.

But the agreement was met with scepticism by many of the Ukrainians who have occupied Kiev’s central Independence Square since November, when Yanukovych sparked outrage by ditching a deal for closer EU integration in favour of stronger ties with old master Russia.

“Elections in December are not enough – he has to leave now,” said 34-year-old Oleh Bukoyenko as he joined 40,000 protesters to hear the peace pact’s details announced on the square late Friday.

Up to 10,000 people remained on the charred square on Saturday morning despite the agreement, demanding that the president step down after a week of bloodshed saw riot police use live rounds against anti-government protesters.

The crisis in Kiev has evolved into a Cold War-style standoff between Moscow and the West over the future of the strategic nation sandwiched between them.

Russia – which has promised a $15bn bailout to its economically struggling former satellite following Yanukovych’s decision to drop the EU deal – has also expressed reservations about Friday’s agreement.

Parliament followed Friday’s agreement by quickly adopting a flurry of opposition-backed laws that still need the president’s signature before entering into force.

One of the main measures amends a law that could see fiery opposition leader Yulia Tymoshenko released from a seven-year jail sentence for “abuse of power” she controversially received after Yanukovych took office in 2010.

The new unity government would also have the authority to reverse Yanukovych’s November decision to ditch closer ties with the EU in favour of Russia.

But many protesters said the deal represented too little and did nothing to repair days of carnage in which police used snipers and armoured vehicles in fighting that turned Kiev’s historic city centre into a war zone.

One ultranationalist speaker grabbed the stage on Independence Square late Friday to call on protesters to storm the president’s office at 10am Saturday should Yanukovych fail to relinquish power overnight.

The call was met with cheers and rounds of applause. Several top opposition leaders meanwhile were booed for signing the compromise agreement allowing Yanukovych to keep his post until snap elections are called by the December deadline.

“I received no pleasure from signing this deal,” charismatic boxer-turned-lawmaker Vitali Klitschko told the restless Independence Square crowd during a candle vigil ceremony for the scores killed in the unrest.

“If I offended any of you, I apologise,” said Klitschko.

The two sides have accused each other of exacerbating problems in a nation whose population remains bitterly divided between a more pro-European west and traditionally more Russified east.

Friday’s peace pact was worked out after two days of intense mediation by the foreign ministers of European powers France and Germany along with Ukraine’s cultural ally Poland and a representative from Russia. Officials said US Vice President Joe Biden also placed repeated calls to both Ukrainian negotiating sides.

Russian President Vladimir Putin’s representative pointedly skipped the signing of the deal. Envoy Vladimir Lukin explained on his return to Moscow that it was “because several questions remain unanswered”.

“The consultations will continue,” Lukin said in comments that suggested Moscow still held out hope of somehow revising the agreement.

A senior US official said President Barack Obama held “a constructive” phone call with Putin as he pressed for the swift implementation of a deal he called “very, very fragile.”

But the Kremlin said in a Saturday statement that Putin stressed the importance of putting pressure on “the radical opposition, which has taken the standoff in Ukraine to a very dangerous threshold.”

Meanwhile the whereabouts of Yanukovych following the signing were unknown, with rumours that he had either flown to Sochi for a meeting with Putin or left for his eastern political stronghold of Kharkiv.

The Ukrainian president’s office issued no statement on Yanukovych’s whereabouts.