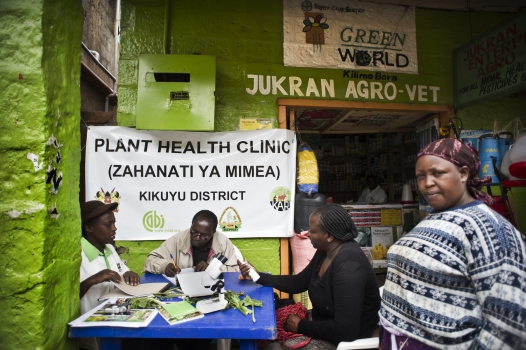 For tens of millions of people in rural Africa, life has gotten harder in recent years. Reliant on erratic rains, working exhausted soil and hobbled by decades of underinvestment and neglect, many have sunk deeper into poverty as agriculture — the mainstay of the region’s economy — continues to face neglect. A growing number of African governments and UN and non-governmental agencies argue that unless urgent efforts are made to raise crop yields, build transportation and marketing systems and adopt modern, sustainable farming methods, the continent will fail to reach its development goals and the rural majority will reap only meagre harvests.

It is difficult to overestimate the importance of agriculture to Africa’s economic prospects. Some 65% of Africa’s labour force is engaged in agriculture, and the sector accounts for about 32% of the region’s GDP, according to the Alliance for a Green Revolution in Africa (AGRA), an independent organisation advocating for improvements in Africa’s agriculture. According to the Food and Agriculture Organisation (FAO), growth in sub-Saharan agriculture employment accounted for half of all employment growth between 1999 and 2009.

In recognition of its importance, proponents of the continental development plan, the New Partnership for Africa’s Development, released NEPAD’s Comprehensive Africa Agriculture Development Programme (CAADP) in 2003. Its goals are ambitious — to allocate at least 10% of national budgets to agriculture, to reach rural growth rates of 6% annually by 2015, integrate and invigorate regional and national agricultural markets, significantly increase agricultural exports, transform Africa into a “strategic player” in global agricultural science and technology, practice sound environmental and land management techniques, and reduce rural poverty.

However, the challenges to success are as large as the potential consequences of failure. The UN’s World Food Programme estimates that more than 55 million Africans were in need of international food aid in 2012. Since 1993, according to researchers for the African Union, annual population growth has outstripped food production on the continent, resulting in a rise in the number of hungry people.

One important obstacle to increased productivity has been the steady deterioration of Africa’s soils, noted Mr Amit Roy, the head of the International Fertilizer Development Centre (IFDC), a US-based institute that promotes agricultural advancement in developing countries. “When farmers plant the same fields season after season and cannot afford to replace the soil nutrients taken up by their crops, the soil is literally mined of life,” he says.

An estimated 8m tonnes of nutrients are depleted annually. Replenishing the nitrogen, potassium, phosphorus and other minerals absorbed by plants is therefore vital to keep crop yields from declining. Part of the answer lies in better farming methods, including expanding the range of crops grown, improving soil conservation practices and utilising improved seeds and technology. But the key to launching a “revolution” in African agriculture, Mr Roy told Africa Renewal, is much greater use of fertiliser.

“Traditionally, African farmers use the slash-and-burn method,” he said. “They burn off a section of land and farm it for a season or two, then clear another plot and leave the old field fallow.” But population increases and growing land shortages have forced farmers to cultivate the same fields repeatedly, stripping the land of nutrients and resulting in smaller harvests and less income. Such pressures have also led farmers to clear land poorly suited for cultivation, which contributes to soil erosion and yields only marginal increases in harvests. An estimated 50,000 hectares of Africa’s forests and 60,000 hectares of savannah are lost to such methods annually — resulting in severe environmental degradation and contributing to the decline in agricultural production per capita.

According to the CAADP, African farmers currently use far less fertiliser than their counterparts in other regions of the world. “A strong relationship exists between the level of fertiliser use and cereal yield,” notes the programme.

Heavy reliance on imported fertilisers, combined with high transportation costs and the absence of suppliers in the countryside, has meant that African farmers pay between two and six times the average world price for fertiliser. With millions of African family farmers surviving on less than a dollar a day, imported fertiliser is simply unaffordable.

Yet evidence suggests that even modest increases in the use of fertiliser — whether nitrogen, phosphorous or potassium — can have dramatic results. In Ethiopia, one study found that just one bottle cap’s worth of chemical fertiliser on each plant increased millet yields exponentially. The technique, known as “micro-dosing,” is regarded as particularly appropriate for Africa’s small-scale farmers, because it reduces costs and avoids damage to fragile soils from excessive chemical use.

Citing the potential environmental risks to African soils and water sources from too much chemical fertiliser being applied to farms — as sometimes happened during Asia’s “green revolution” — proponents of sustainable agriculture in Africa argue that farmers should use more animal manure, compost and other organic fertilisers. If farmers better integrate stock-raising with crop cultivation, cattle and other livestock could provide them with not only more manure but also with animal traction for ploughing fields and hauling crops after they are harvested.

While organic fertilisers are important, agrees Mr Roy, he points to a serious limitation. “The quality of animal manure is dependent on the quality of the food the animals are fed.” With much soil severely depleted, he says, “the fodder contains little of the nutrients needed by crops.” Organic fertilisers alone “are simply not the answer to the crisis of Africa’s soil fertility. We need to increase the use of both organic and chemical fertilisers.”

The CAADP makes the same point. Under the new, integrated approach to African agriculture advocated by NEPAD, “mineral fertilisers and organic matter are treated as complements rather than substitutes.”

One way to make chemical fertilisers more available and affordable is to increase local production. This can reduce costs, ease the pressure on foreign currency reserves and shorten the supply chain to farmers. Although Africa consumes only about 1% of global fertiliser production and currently produces even less, prospects for the commercial manufacture of fertilisers are good. Nitrogen is among the most common elements on earth, but converting it into use for plants is energy-intensive. West Africa’s vast and largely untapped natural gas resources, notes Mr Roy, therefore make the region ideally suited for the manufacture of nitrogen fertiliser. Africa also has ample deposits of phosphorus and already exports the mineral to Chinese and Indian farmers. If these minerals can be utilised in local production, Africa would need to import only potassium fertiliser.

But investment in fertiliser production will only come in response to increased demand from farmers, Mr Roy asserts. Persuading Africa’s family farmers that purchasing fertiliser is worth the money and effort will require significant improvements in rural transport networks and infrastructure, an expanded network of rural farm suppliers and markets, and greater financial returns, including protection from price fluctuations and subsidised Northern competitors.

“Fertiliser is not a silver bullet for Africa’s agricultural problems,” Mr Roy admits. “The fertiliser doesn’t help if it arrives too late, or the crops aren’t watered or you can’t sell the harvest. Farmers know this. That is why CAADP is so important. It addresses the needs of farmers comprehensively.”

In the face of erratic and unreliable rainfall in large swaths of East and Southern Africa, expanding the acreage of irrigated land is also urgent. Former UN Food and Agriculture Organization Director-General Jacques Diouf once complained to a group of African agriculture ministers that only a portion (around 4%) of sub-Saharan Africa’s arable land is irrigated, compared with 38% in Asia. Although much of Africa has abundant water supplies, he further added: “The region uses less than 3% of its water resources, the lowest percentage of the developing world.” NEPAD researchers have estimated the initial investment of irrigating 20m more hectares of African farmland at $37bn, with an additional $31bn in operating costs through 2015.

Rebuilding rural supply networks and marketing systems so farmers have the means and incentives to produce more is another major challenge. Government-run agriculture marketing boards used to perform some of these functions, providing stable prices, credit extension services, improved seeds and technology to local farmers.

Mr Roy says that expanding private sector involvement in rural marketing and supply activities is a long-term solution. But he acknowledges that high poverty rates in the countryside and the need for “public goods” like roads and markets give African governments a key role in creating incentives for private investment.

Finally, Mr Roy observes: “Africa needs to do a better job in applying science and technology to agricultural problems, and getting those advances to the farmer more quickly.” Here, too, there are encouraging signs.

“The African farmer is primarily a woman farmer,” Mr Roy concludes. “And she is a good farmer who can feed her family and her continent if she is given the tools and the opportunities to do so.”