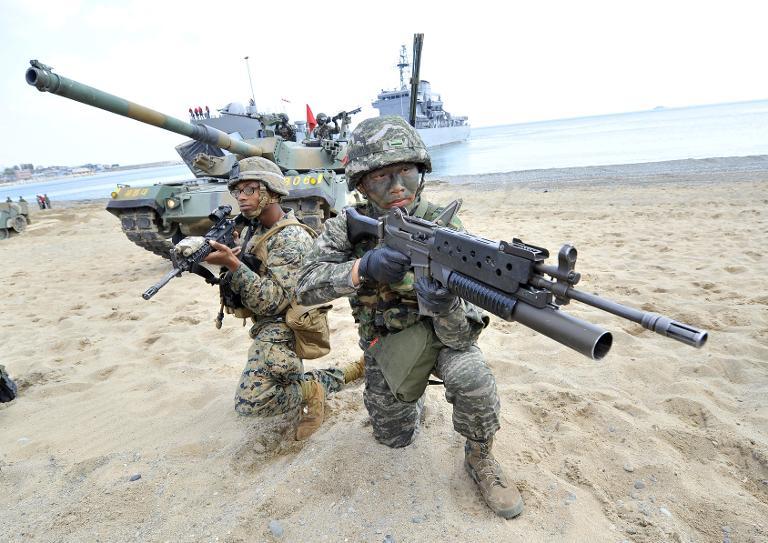 AFP – South Korea kicked off its annual joint military exercises with the United States on Monday, despite vocal opposition from North Korea which will test a recent upswing in cross-border ties.

The start of this year’s drills overlaps with the first reunion for more than three years of families divided by the Korean War – an event that has raised hopes of greater North-South cooperation.

Pyongyang had initially insisted that the joint exercises be postponed until after the reunion finishes on Tuesday, but Seoul refused and – in a rare concession – the North allowed the family gathering to go ahead as scheduled.

The annual “Key Resolve” and “Foal Eagle” drills – routinely condemned by North Korea as rehearsals for invasion – will last until 18 April and involve a combined total of 12,700 US troops and many more from South Korea.

“Key Resolve” lasts just over a week and is a largely computer-simulated exercise, while the eight-week “Foal Eagle” drill involves air, ground and naval field training.

Seoul and Washington insist they are both defensive in nature, playing out various scenarios to combat a North Korean invasion.

US defence officials have indicated – in an apparent effort to mollify the North – that this year’s drills will be slightly toned down, with no aircraft carrier and no strategic bombers.

However, South Korean Defence Ministry spokesman Kim Min-Seok insisted Monday there would be “no readjustment” in the scale of the manoeuvres.

Saturday’s edition of the North’s ruling party newspaper Rodong Sinmun slammed the exercises as a “vicious attempt” to undo the goodwill generated by the family reunion.

Such rhetoric was only to be expected, and analysts say the North is unlikely to go much further for fear of jeopardising the credit it sees itself as having banked by agreeing to the divided family meetings.

“The North’s strategy is clearly to gain some economic benefit on the back of the family reunion,” said Ahn Chan-Il, director of the World Institute for North Korea Studies in Seoul.

In particular, North Korea wants the South to resume regular tours to its Mount Kumgang resort, which provided a much-needed source of hard currency in the past.

South Korea suspended the tours after a woman tourist was shot dead by North Korean security guards in 2008.

South Korean President Park Geun-Hye has made it clear that Seoul considers the reunion a “first step” – suggesting that her administration is willing to consider some reciprocity down the road.

John Delury, a professor at Seoul’s Yonsei University, believes Park and North Korean leader Kim Jong-Un are at a point where their respective national interests could dovetail to their mutual benefit.

“Once she begins to act with resolve things could move quickly if Kim is ready to play ball,” Delury wrote on the closely-followed North Korea-focused website 38 North.

The North’s threat to cancel the reunion over the joint drills was withdrawn during talks earlier this month that marked the highest-level official contact between the two Koreas for seven years.

Both sides agreed to keep the dialogue going, although without any specific timetable or agenda.

And any further progress is likely to be limited.

While there are numerous confidence-building measures that could be put in place, nothing is going to escape the shadow cast by North Korea’s nuclear weapons programme.

Pyongyang would like direct talks with Washington, but US Secretary of State John Kerry reiterated during a recent visit to Seoul that there could be no dialogue until the North showed a tangible commitment towards denuclearisation.

For the moment, therefore, Seoul and Pyongyang are alone at the table, but the fact they are there together at all is a substantive step forward.

In a further goodwill gesture, South Korea on Monday offered to send vaccine and medical equipment to help contain an outbreak of foot-and-mouth disease in the North.

The offer came days after the North confirmed cases of the highly contagious livestock disease at a pig farm in a suburb of Pyongyang.