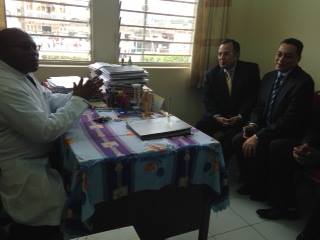 Interim Minister of Foreign Nabil Fahmy affairs visited the city of Goma, located in the Kivu province in eastern Democratic Republic of the Congo on 25 February, where he announced that Egypt would donate EGP 22m in aid to equip six clinics in the city’s general hospital.

Egypt’s contribution to the Congo will also outfit a vocational rehabilitation centre, which will help in the process of reconstructing Goma after the cessation of insurgency in the province, Ministry of Foreign Affairs spokesman Badr Abdelatty said in an official statement. More than three quarters of a million people have fled their homes in the country since April 2012 when a group of soldiers mutinied to form the Congolese Revolutionary Army.

The hospital’s director showed Fahmy around the different sections of the hospital, as well as the six clinics that Egypt will pay to equip, he said.

The money used to equip the six clinics will be provided by the council of African affairs, a department within the foreign minsitry which is responsible for providing required aid funds for African countries, according to Dr Mahmoud Aboul Einien, ex- dean of the Institute of African Research.

A representative from the governor’s office, who also met with Fahmy, said Egypt is playing an important role in leading the process of peacekeeping within the province.

During his visit, Fahmy also met with the director of a United Nation’s expeditionary force that has been working to halt the rebellion and restore stability to the province. The Egyptian government sent 1,300 soldiers and officers to aid the UN.