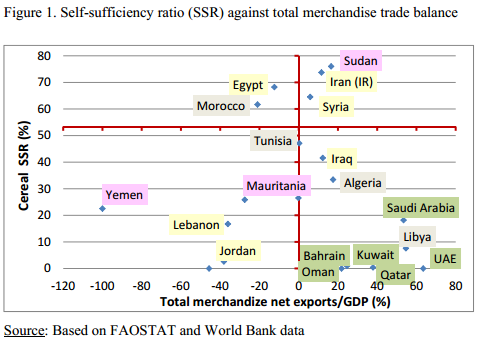 Countries in the Middle East and North Africa (MENA) region are facing “enormous challenges” in balancing the dual imperatives of managing limited natural resources and properly nourishing their people, according to a Monday report from the UN’s Food and Agriculture Organization (FAO).

The report, titled “State of Food and Agriculture in the Near East and North Africa Region” and presented Monday in the organisation’s conference in Rome, outlined top challenges to regional food security and suggested means of addressing them.

Among the top challenges cited were high population growth, inefficient agricultural practices and reliance on imports, and exposure to such threats as climate change and regional conflict.

The region’s high population growth – 2% compared to 1.2% globally – also comes with a high rate of urbanization, with 70% expected to be living in cities by 2050, the report said. “A rapidly increasing urban population, which has distinctly different food consumption habits and a greater dependence on the market than the rural population, is a particular challenge for the food system,” it stated.

These demographic challenges coupled with low agricultural productivity, the report pointed out, have pushed many countries in the region to import much of their food needs, with “the average share of food imports in total merchandise imports [standing] at 10% for the region, i.e. twice the world average.”

As the largest importer of wheat on the planet, Egypt is no exception to this problem. On Tuesday, Minister of Finance Ahmed Galal announced that the Ministry of Finance would provide the General Authority for Supply Commodities (GASC) with $127.682m to guarantee the authority’s ability to import  approximately 240,000 tons ($75m worth) of wheat and 58,500 tons ($52m worth) of cooking oil.

In the long term however, such reliance on imports, the report warns, exposes countries to price fluctuations of international markets – a major risk.

An added vulnerability lies in the “high incidence of natural and manmade disasters,” the former of which including climate-change driven drought, to which agriculture in MENA countries is particularly vulnerable. Local and regional conflict meanwhile presents another danger, and with the consequent loss in food security, it drives significant flows of refugees.

“In Syria, for instance, it is now estimated that 6.3 million people are highly vulnerable and in critical need of sustained food and agricultural assistance,” the report read. “The total number of registered Syrian refugees reached more than 2.1 million as of November 2013… mostly residing in Lebanon, Jordan, Turkey Iraq, and Egypt.”

These factors, the report said, have led to a very high incidence of undernourishment in the region, amounting to 43.7 million or 10% of the population, with 24.5% of children stunted in growth. “Among the 36 countries with the highest burden of stunting in the world, six (Afghanistan, Egypt, Iraq, Turkey, Sudan, Yemen)” are in the Middle East and North Africa.

At the same time, the  report points to the region having one of the world’s highest obesity rates, at about 25% of the population, which is “double the global average”, representing “the so-called double burden of malnutrition”.

The second half of the report offers up suggestions to tackle these challenges, first among which is the channeling of state resources into the development of rural infrastructure and research and development to eliminate wasteful agricultural practices.

The report notes that there has been some progress, however. Three countries in the region (including Algeria, Jordan and Kuwait,) have met the hunger component of the first Millennium Development Goal (MDG1) by halving the proportion of their population experiencing chronic hunger.

The issue of children’s malnutrition in the region has seen attention over the past year. In January, the International Fund for Agricultural Development (IFAD ) held a workshop with Arab representatives, researchers and development agencies to discuss reducing the effect of crises that include conflict and global spikes in food prices, with a focus on the rural poor.

In June 2013, members of the G8 signed an agreement to strive to end children’s malnutrition in developing countries. That same month, a study conducted by the United Nations World Food Programme (WFP) estimated total economic losses suffered by Egypt in 2009 from children’s malnutrition to have reached EGP 20.3bn, equaling to 1.9% of the country’s gross domestic product (GDP).

The Egyptian Initiative for Personal Rights (EIPR) expressed its serious concern over the June report, adding that obvious signs of economic deterioration in Egypt and, despite this, politicians insist on “making rosy statements regarding the food security situation in the country.”

GASC Vice President Mamdouh Abdel Fattah meanwhile believes such concerns are overstated. “Egypt doesn’t face any problem with its ability to provide necessary commodities such as wheat and oil to its citizens, [nor in] finding finances needed to import those necessary products,” he said.