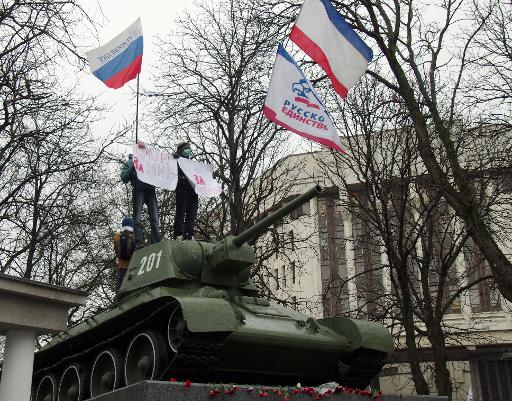 AFP — Ukraine accused Russia of staging an “armed invasion” of Crimea on Friday and appealed to the West to guarantee its territorial integrity after pro-Moscow gunmen took control of the peninsula’s main airport.

Amid the spiralling tensions in the ex-Soviet state, the country’s ousted president Viktor Yanukovych prepared to emerge defiant from five days of hiding after winning protection from the Kremlin.

Unidentified armed men were patrolling outside of Crimea’s main airport early Friday while gunmen were also reported to have seized another airfield on the southwest of the peninsula where ethnic Russians are a majority and where pro-Moscow sentiment runs high.

Ukraine’s parliament on Friday appealed to the United States and Britain to uphold a 1994 pact signed with Russia that guaranteed the country’s sovereignty in return for it giving up is Soviet nuclear arsenal.

Interim president Oleksandr Turchynov also told agitated lawmakers that he was convening the country’s security and defence chiefs for an emergency meeting over the unfolding crisis.

Western governments have been been watching with increasing worry as Kiev’s new pro-EU rulers grapple with dual threats of economic collapse and secession from Russified southern and eastern regions that had backed fugitive ex-president Viktor Yanukovych.

Russian President Vladimir Putin this week stoked concerns that Moscow might use its military might to sway the outcome of Ukraine’s three-month standoff by ordering snap combat drills near its border involving 150,000 troops and nearly 900 tanks.

Interim president Turchynov responded on Thursday by declaring that any movement of Russian troops out of their Black Sea bases in Crimea “will be considered as military aggression”.

US Secretary of State John Kerry attempted to relieve diplomatic pressure that has increasingly assumed Cold War overtones by announcing that Russian Foreign Minister Sergei Lavrov had assured him that Moscow “will respect the territorial integrity of Ukraine.”

Putin also appeared to take a more conciliatory approach late on Thursday by vowing to work on improving trade ties with Ukraine and promising to support international efforts to provide Kiev with funds that could keep it from declaring a debt default as early as next week.

Yet tensions continued to soar by the hour in the Russian-speaking Crimea — a scenic Black Sea peninsula that has housed Kremlin navies for nearly 250 years and was handed to Ukraine as a symbolic gift by a Soviet leader in 1954.

Ukraine’s Interior Minister Arsen Avakov accused the Russian armed forces of being directly involved in armed dawn raids on an airport in Crimea’s main city of Simferopol as well as an airfield on the southwestern coast.

AFP reporters saw dozens of men armed with Kalashnikovs encircle the Simferopol airport on Friday morning after reports suggested that they had briefly seized control of its runway.

An administrator told AFP the “airport was operating normally” on Friday morning despite the presence of the armed men in battle fatigues.

Unconfirmed reports by Ukrainian media said armed men had also seized the Belbek airfield near the city of Sevastopol, which is home to Russia’s Black Sea fleet.

Avakov accused the Russian armed forces of being behind both incidents.

He said gunmen at the Simferopol airport “are not even hiding the fact that they belong to the armed forces of the Russian Federation.”

The interior minister added that the Belbek airfield was “blockaded by military units of the Russian navy.”

“I consider what is happening to be an armed invasion and an occupation,” Avakov said in a statement posted on his Facebook account.

But Russia’s Interfax news agency quoted an unnamed source as saying that the Belbek air field was under the control of local pro-Russian self-defence units who had no links to the Black Sea fleet.

The peninsula of nearly two million people has been in crisis since dozens of pro-Kremlin gunmen seized and raised the Russian flag over Crimea’s parliament and government buildings on Wednesday.

Crimean lawmakers appointed Russian Unity party member Sergiy Aksyonov as regional premier in place of Kiev-allied Anatoliy Mohilyov in a vote held late on Thursday under the watchful eye of the pro-Kremlin militia.

Aksyonov said on Friday that he still recognised Yanukovych as Ukraine’s legitimate head of state.

The fugitive leader had not been seen since making a brief taped television appearance last Saturday that was aired only hours before parliament stripped him of power for a week of carnage in Kiev that claimed nearly 100 lives.

Ukraine’s bloodiest crisis since its 1991 independence erupted in November when Yanukovych made the shock decision to ditch an EU trade pact in favour of closer ties with old master Russia.

The 63-year-old fugitive issued a statement to Russian news agencies from an undisclosed location on Thursday announcing that he was “compelled to ask the Russian Federation to ensure (his) personal security.”

A source later told the same agencies that Yanukovych’s request for protection “was satisfied on Russian territory.”

The ousted leader is now expected to appear before the media at 1300 GMT in Rostov-on-Don — a Russian city less than two hours’ drive from the Ukrainian border.

Yet his personal problems do not appear to be over even if Yanukovych pronounces himself to be the head of a Ukrainian government in exile.

Switzerland said on Thursday said it was prepared to freeze any funds the Yanukovych family might have in the Alpine country’s banks.

It is unclear whether Yanukovych himself has funds in Switzerland. But his 40-year-old son Olexandr opened a branch of his Management Assets Company (MAKO) in Geneva in late 2011.

The Swiss weekly L’Hebdo estimates that Olexandr had amassed a personal fortune of around half a billion dollars (365 million euros) in the past three years alone.

The leadership in Kiev won some reprieve when Kerry promised quick delivery of $1 billion in loan guarantees “with some other pieces” to follow.

Kerry said the EU was looking at loan guarantees worth some $1.5 billion for the nation of 46 million people.

Ukraine’s new rulers have appealed for $35 billion for the teetering economy.