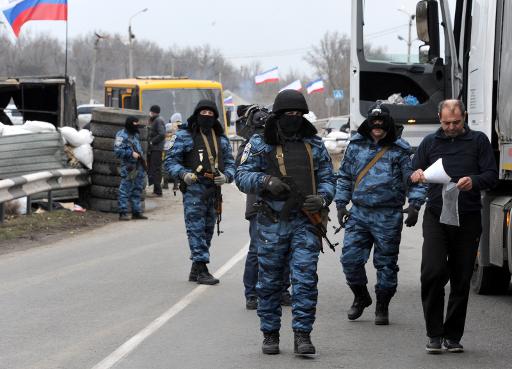 AFP – Pro-Russian forces tightened their grip on Crimea on Saturday as the Kremlin vowed to help restore calm on the restive Ukrainian peninsula and Washington warned of “costs” to Moscow should it order in troops.

Dozens of armed men in full combat gear were patrolling the streets of Crimea’s capital of Simferopol a day after similar gunmen seized control over airports and government buildings in the Ukrainian territory where the majority of the population is Russian and where one of Moscow’s main fleets is based.

In Kiev, the new cabinet led by some of the main figures of at-times deadly protests against ousted president Viktor Yanukovych’s pro-Kremlin rule opened its first meeting with the twin spectres of secession and default hanging over Ukraine.

The new government was dealt a new jolt when Russia’s energy giant Gazprom bluntly warned Kiev that it had accumulated a “huge” debt for unpaid natural gas that needed to be urgently paid.

The strategic nation of 46 million has been torn apart between the West and Russia in a Cold War-style confrontation that has also exposed the ancient cultural rifts between its pro-European west and Russian-speaking south and east.

Nowhere has that divide been more apparent than in Crimea — a Black Sea peninsula of nearly two million people that has housed Kremlin navies for nearly 250 years and which a Soviet leader gifted to Ukraine when it was still a part of the USSR in 1954.

Pro-Russian gunmen seized Crimea’s government and parliament buildings in the main city of Simferopol on Thursday before allowing lawmakers to appoint a new prime minister and call for a regional referendum on 25 May– the day of snap presidential polls– that would proclaim even greater independence from Kiev for the already-autonomous region.

Dozens of soldiers with no insignia but dressed in Russian battle fatigues and armed with Kalashnikovs then seized Crimea’s main airport in Simferopol and Ukraine’s Belbek military air base near Sevastopol — home of Russia’s Black Sea Fleet.

Crimea’s newly-chosen prime minister followed that up by calling on Russian President Vladimir Putin to help restore “peace and calm” amid his standoff with the Kiev authorities.

“Taking into account my responsibility for the life and security of citizens, I ask Russian President Vladimir Putin to help in ensuring peace and calm on the territory of Crimea,” Sergiy Aksyonov said in an address broadcast in full on Saturday by Russian state television.

A source in the Kremlin administration soon told Moscow’s three main news agencies that “Russia will not leave this request without attention.”

Ukraine’s interim president Oleksandr Turchynov had made his own dramatic appeal to Putin late on Friday as the pace of Russian troop movements intensified around their bases and armoured personnel carries patrolled Simferopol’s main streets.

“I personally appeal to President Putin to immediately stop military provocation and to withdraw from the Autonomous Republic of Crimea,” a sombre Turchynov said on national television.

“It is a naked aggression against Ukraine.”

Prime Minister Arseniy Yatsenyuk tried to ease some of the tensions on Saturday by saying that Ukraine did not intend to respond to Russia’s “provocation” with the use of force.

The ex-Soviet country’s bloodiest crisis since its 1991 independence erupted in November when Yanukovych rejected an historic deal that would have opened Ukraine’s door to eventual EU membership in favour of tighter ties with old master Russia.

Crimea’s main airport in Simferopol stopped operating late on Friday because of what one Kiev official said were unceasing flights across the peninsula by Russian military cargo planes.

Ukraine also filed a formal protest after claiming that Russian helicopters had entered its airspace as part of snap military drills involving 150,000 troops that Putin had ordered in a region bordering Ukraine last week.

The UN Security Council discussed the crisis behind closed doors on Friday while US President Barack Obama — although not referring to Russia directly — warned that “there will be costs for any military intervention in Ukraine.”

“We are now deeply concerned by reports of military movements taken by the Russian Federation inside of Ukraine,” Obama said in a hurriedly scheduled statement at the White House.

A senior US official separately told AFP that Obama and some key European leaders could skip June’s G8 summit in Sochi if Moscow’s forces became more directly involved in Ukraine.

The US official said on condition of anonymity that the trip to Russia could be cancelled as part of the “costs” that Obama had earlier described.

Western governments have been watching with increasing alarm as Kiev’s new rulers grapple with the dual threats of economic collapse and secession by Russian-speaking regions that had backed Yanukovych.

“Clearly, with this debt Ukraine may not be able to keep its discount [to market price] for the gas. The agreements on the discount forsee a full and timely payment.”

Ukraine won a one-third discount from Gazprom under a deal signed by Yanukovych with Putin that also saw Russia promise to buy $15bn in the Kiev government debt.

But Russia has only bought $3.0bn in debt in December and has effectively frozen further deliveries of aid.

Ukraine’s new leaders have said that the economically-teetering country needs $35bn over the coming two years to keep the economy afloat.