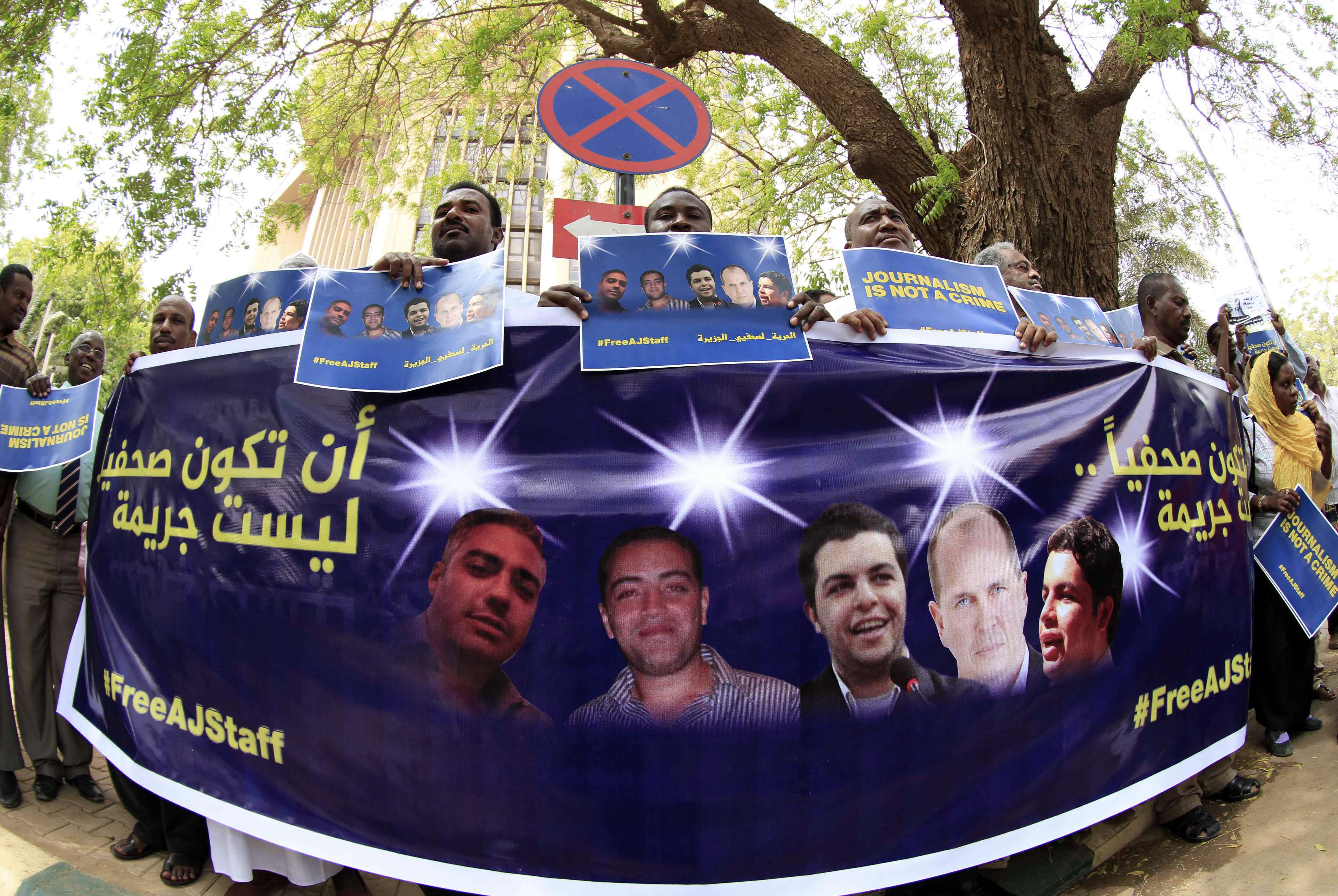 On Thursday, journalists from around the world, including the Al Jazeera staff, staged a “Global Day of Action” in 40 different locations around the world to protest Egypt’s continuing crackdown on press freedom.

Under the banner “Journalism Is Not A Crime,” journalists and activists in dozens of countries protested with their mouths covered as a symbol of solidarity with the four Al Jazeera journalists detained in Egypt.

The staff at Al Jazeera’s headquarters in Doha, Qatar held a silent protest on live television.

“Perhaps me standing here may not get them out [of jail], but I hope that this will make everyone else join the cause,” said Al Jazeera editor David Poort.  “Only then will they be brought out.”

“In Egypt, [journalists are] being taken hostage,” said Simon. “I don’t want to use the word prisoner, because a prisoner will have charges against him, and these guys haven’t really been charged with anything credible.”

Simon, who was held by Iraqi forces for 40 days during the First Gulf War in 1991, called being detained “indescribable”, adding that it changed his “mentality” and his life.

Simon said that anything short of a phone call directly from United States President Barack Obama to Field Marshal Abdel-Fattah Al-Sisi would have little effect on securing the freedom of the journalists.

The arrests and detention of journalists in Egypt has garnered international ire. The US State Department called the charges against the journalists “spurious”, while the White House, the European Union, the United Nations and the Australian government have all expressed their unequivocal condemnation, and called for the journalists’ release.

Dubbed the “Marriott Cell” by the prosecution, the main charges centre around three Al Jazeera English journalists arrested on 29 December: Canadian-Egyptian bureau chief Mohamed Fadel Fahmy, Australian correspondent Peter Greste, and producer Baher Mohamed, an Egyptian national. Fahmy and Greste were arrested at the Zamalek Marriott where they were using two rented suites as a base of operations, while Mohamed was arrested the same night at his home in suburban Cairo.

Abdullah Al-Shami, who works for Al Jazeera Arabic, was arrested during the 14 August dispersal of the sit-in at Cairo’s Rabaa Al-Adaweya Mosque in support of deposed president Mohamed Morsi. He has been detained since, and is on his 40th day of a hunger strike.

Originally scheduled for 20 February, the trial for Greste, Fahmy, and Mohamed—along with 17 other journalists in absentia—was adjourned to 5 March. The trio was denied a request for bail.

Other recent reports by the CPJ stated that six journalists were killed in the line of duty in Egypt in 2013, while another 71 journalists were either detained or assaulted. Last year Egypt ranked among the top ten jailors of journalists in the world.

As Sudan protests erupt, Khartoum turns to UN over border disputes with Egypt