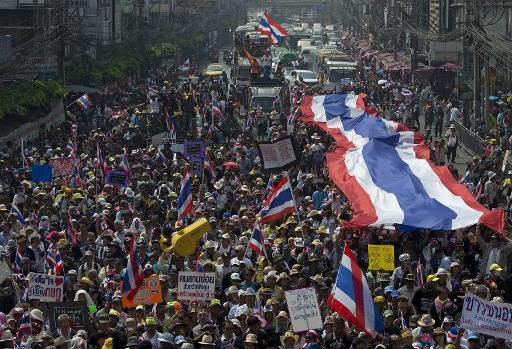 AFP – Time was, overturning a freely-elected government would have earned a sharp US rebuke. But as people power revolts sweep some countries, Washington is increasingly giving its blessing to ousting leaders accused of betraying democracy.

From Egypt, where the nation’s first democratically-elected president Islamist leader Mohamed Morsi was toppled in July by the army, to Ukraine where Viktor Yanukovych, brought to power in 2010 polls, fled his post after months of street protests, the US has had to fine-tune its response.

Indeed US Secretary of State John Kerry said bluntly this week: “A democracy is not defined solely by an election.”

“And what you have in many places is a general election, a popular election, absent reform, present with great corruption, great cronyism and a huge distortion of democratic process.”

While at first glance protests in Thailand and Venezuela may have nothing in common with the demonstrations against the elected leaders in Ukraine and Egypt, analysts and diplomats argue there is often a common core.

It is “an incredible yearning for modernity, for change, for choice, for empowerment of individuals that is moving across the world, and in many cases moving a lot faster than political leadership is either aware of or able to respond to,” Kerry said.

French intellectual Jacques Attali, once an advisor to former president François Mitterrand, asked “what are the people supposed to do when democracy has been betrayed by those they brought to power?”

“The people have to act, demonstrate, remind the leaders of their promises. And if they don’t succeed in convincing them, they have to bring them down,” wrote Attali in his blog for the French magazine L’Express.

Despite accusations from Venezuelan President Nicolas Maduro that the US is fomenting unrest in his country, analysts see little direct involvement by Washington in triggering revolts even if later on, such as in Ukraine, there is an open eagerness to help the struggle towards democracy.

Top US diplomat for Europe, Victoria Nuland, even visited the protestors on Independence Square in Kiev in December to hand out bread in a high-profile show of support for their desire to move closer to Europe and away from the clutches of the communist authorities in Moscow, which since the end of the Cold War has had difficult ties with the US.

“It is accurate to say that where regimes violate human rights, move in that direction or are involved in corruption, that those patterns of behavior are viewed negatively by the US, the UK and other countries,” said Mark Schneider, senior vice president of the International Crisis Group.

“But I think that it is rare that they move from that judgment to support in any way violent activities. I think they are almost always somewhat surprised by the depth, power, determination to accept sacrifice by people in certain circumstances.”

The situation in Thailand, a constitutional monarchy since 1932 where the king is highly revered, is somewhat unique.

Protestors have been pressing for Prime Minister Yingluck Shinawatra to step aside in favour of an unelected “people’s council” to introduce vaguely defined reforms such as tackling alleged corruption.

An anti-corruption panel is now pressing negligence charges against Yingluck that could lead to her removal from office and a five-year ban from politics.

But Paul Chambers, director of research at the Institute of South East Asian Affairs at Chiang Mai University, harked back to the radical philosophers of the early 20th century to draw parallels with a new “class conflict”.

“Dominant parties which continue to benefit from such [elite] systems are seen by mostly middle and upper classes as impediments to freedom and facilitators of corruption,” argued Chambers, while lower classes have a more basic desire for empowerment found just by casting a vote.

Kerry called late Friday for an investigation into “politically-motivated” attacks which have left 23 people dead in Thailand, including four children, but renewed assurances that Washington is not taking sides in the upheaval.

He had the same message for Venezuela urging dialogue and revealing that the United States is working with its allies in South America to find an acceptable third party to help mediate an end to three weeks of often violent protests against Maduro’s leftist government.

“Unlike in Ukraine, right now in Venezuela there is no an alternative power strong enough to initiate regime change,” said political professor Carlos Romero from the Universidad Central de Venezuela.

He bemoaned that so far there had been no international effort to end the violence, unlike the diplomatic flurry around Ukraine and Egypt, an absence he attributed to his country’s lack of geopolitical significance.