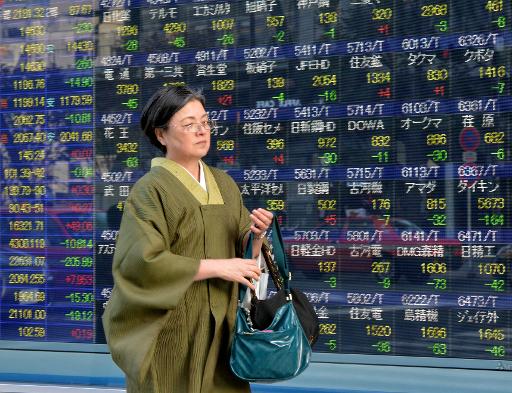 The downbeat atmosphere was compounded in some markets by another disappointing set of manufacturing figures from China that added to concerns about growth in the world’s number two economy.

However, Shanghai rose 0.92%, or 18.93 points, to 2,075.23 as investors brushed off the weak manufacturing figures ahead of Beijing’s annual policy gathering later in the week.

The long-running political crisis in Ukraine took another turn Saturday when lawmakers in Moscow voted to allow President Vladimir Putin to send troops into Crimea, a mainly Russian-speaking peninsula in the southeast of the ex-Soviet state.

In what has become the most serious crisis since the end of the Cold War, global leaders condemned the move as Ukraine’s new Western-backed prime minister Arseniy Yatsenyuk warned: “We are on the brink of a disaster.”

US President Barack Obama branded the move a “violation of Ukrainian sovereignty”, while Secretary of State John Kerry warned Moscow faced being kicked out of the Group of Eight economic grouping if it did not step back.

Atsushi Hirano, head of FX sales Japan at Royal Bank of Scotland, told Dow Jones Newswires: “Tensions have risen with the United States. Stocks are likely to be negatively affected.”

The tensions sent investors scurrying to the yen, which is considered a safe bet in times of political and economic uncertainty. In afternoon trade the dollar was at JPY 101.33, compared with JPY 101.76 in New York Friday afternoon, while the euro fetched JPY 139.51 against JPY 140.44.

With Russia also a huge supplier of oil to European nations, the price of both main crude contracts also spiked.

There were renewed worries about the health of China’s economy after Beijing said its official purchasing managers’ index (PMI) of manufacturing activity fell to an eight-month low of 50.2 last month.

The figure represents the third straight drop following a reading of 50.5 in January, 51.0 in December and 51.4 in November.

A figure above 50 indicates expansion while one below shows contraction. However, officials stressed that the result was skewed by the Chinese New Year holidays at the start of the month.

China’s economic growth has weakened in recent years, hitting 7.7% in 2013, the lowest level since 1999. Analysts expect a further drop to 7.5% this year.

Eyes will now be on the annual National People’s Congress, which opens this week.

The event will be closely watched for the disclosure of China’s annual growth target.

The broad advance came despite the Commerce Department saying US gross domestic product growth in the final quarter of 2013 came in at 2.4%, compared with its initial estimate of a 3.2% expansion.

The downward revision was bigger than analysts’ forecast of 2.6% and included a cut to closely watched consumer spending growth.

However, analysts said investors view the latest data as partly the result of extremely cold weather that has depressed economic activity.