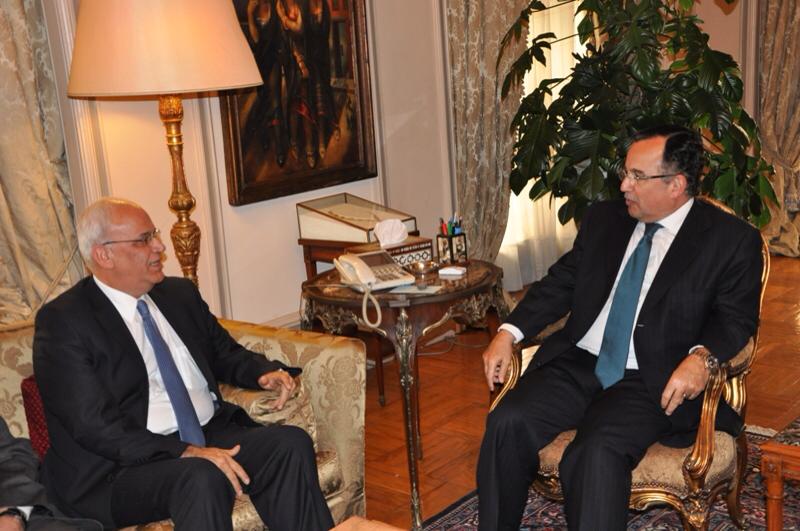 Minister of Foreign Affairs Nabil Fahmy has urged Palestine’s chief negotiator Saeb Erakat to stick to the agreed upon timeframe for the on-going final status negotiations with Israel.

In a meeting held in Cairo on Sunday Fahmy also stressed the need for the Palestinian side to present a “clear and specific vision” for the post-negotiation period.

During their meeting Fahmy reiterated Egypt’s support for the Palestinian side, and “primarily the right to self-determination and the establishment of an independent Palestinian state on their entire national soil and its capital in East Jerusalem.”

Israel has recently called on United States Secretary of State John Kerry to extend the nine-month timeframe for these preliminary negotiations, the deadline of which is scheduled for the end of April. The Palestinian side have said it would not continue negotiations beyond this deadline.

The talks, which began in August 2013, have been fraught with accusations from both sides of not taking the talks seriously. One of the main sticking points between the two sides is the ongoing Israeli settlement activity in the West Bank as well as the status of East Jerusalem.

In January, Fahmy participated in the Al Quds (Jerusalem) committee meeting in Marrakech. During his address the minister accused the Israeli authorities of attempting to alter the identity of the holy city. He said there is a “fierce attack” on the city aimed at changing the “demographic of the city through arbitrary measures aimed at the displacement of its Palestinian citizens”.