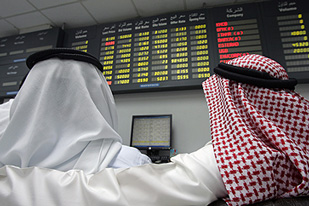 Reuters – Saudi Arabia’s bourse rose to a 68-month high in heavy trade on Sunday after Fitch upgraded the country.

“The upgrade adds to the popularity of the market for foreign investors, which boosts the morale of local investors,” said Abdullah Alawi, assistant general manager and head of research at Aljazira Capital. Foreigners can only invest indirectly in the Saudi market through instruments such as swaps, but their interest has been rising.

Sentiment was positive almost across the board; the banking index gained 1.0%, while the retail sector rose 2.3% and real estate shares jumped 2.7%.

Turnover in Saudi Arabia has surged in recent days, which could be partly because of an investment shift from physical real estate to equities.

The Ministry of Housing has launched massive projects for affordable housing, in an attempt to bring down real estate prices in a heavily speculative market. Alawi said the ministry was also pushing to release more land for development.

“The potential increase in supply of land is putting pressure on prices of real estate and we are seeing early signs of money fleeing from land into stocks,” Alawi said.