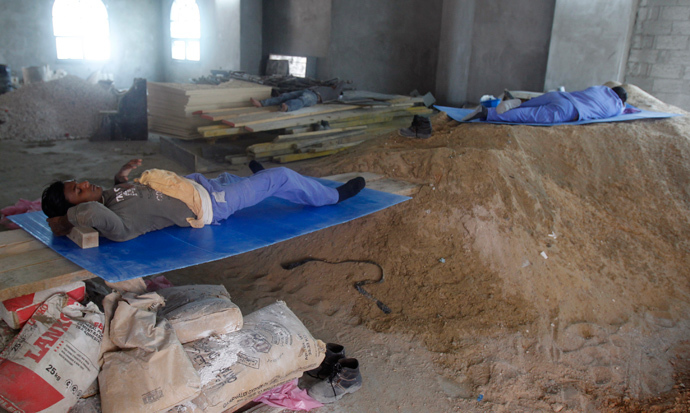 Reuters – Qatar will likely face higher labour costs as a result of publicity about deaths of migrant construction workers building the infrastructure for the 2022 World Cup soccer tournament, the International Monetary Fund said.

Britain’s Guardian newspaper reported in September that dozens of Nepali workers had died during the summer in Qatar and that labourers were not given enough food and water.

Qatar, which has denied the Guardian’s findings, has seen an increasing influx of foreigners, now estimated at 1.8 million, with its population rising 10% in 2013.

“Working conditions of some construction workers and domestic help has made global headlines and could affect the availability and cost of hiring new workers in the future,” the Fund said after completing annual consultations with Qatar.

“This would hinder growth since the success of Qatar’s current development model depends importantly on the ability to rapidly hire expatriate workers,” it said.

The gas-rich nation has planned to spend some $140bn in the run-up to the World Cup on new infrastructure projects, including a metro, port and airport.

Such large public investments entail a possibility of overheating in the near term and low return and overcapacity in the medium term, the IMF warned. “In particular, the extent to which public investment will durably boost private sector productivity remains uncertainty,” it said.

Certain big-ticket projects such as the metro, port, and airport have been scaled down or divided into phases to reduce the overcapacity risk, and the authorities are preparing a shortlist of critical projects, the Fund said without details.

However, the large-scale nature of the programme has led to implementation delays and cost overruns and Qatar will continue facing the risk of cost escalation given its commitment to a compressed timetable ahead of the World Cup, it also said.

Increasing government spending may push the fiscal balance into a deficit over the medium term when combined with flat production of liquefied natural gas (LNG), falling crude oil output from mature fields and lower hydrocarbon prices.

“The public debt ratio is expected to fall, but the headline budget balance could … turn into deficit over the medium term, while the current account surplus could drop to 5% of GDP,” the IMF said.

The government intends to reduce public debt over time from an estimated 33.1% of GDP in 2013 by trimming foreign borrowings and domestic loans. It would continue issuing government securities to support bond market development.

Inflation should remain benign at 3.3% this year and 3.5% in 2015, the IMF said, less than 4.0% forecast for both years in October, as a decline in commodity prices will help reduce pressure from strong economic activity.