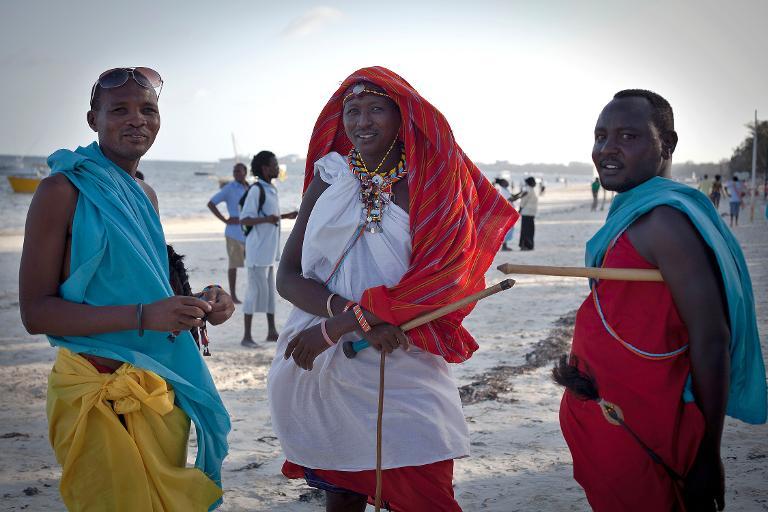 AFP – On a golden beach near the coastal city of Mombasa, the mood among locals whose livelihoods depend on foreign sunseekers is gloomy as Kenya’s neighbours are stealing away price-conscious tourists.

“Business is bad. There are not many tourists, I haven’t sold anything for two weeks,” complained Kazungu, a 27-year-old who touts boat excursions and souvenirs on the golden sands of Nyali beach.

The beach is full of Kenyans, but few foreigners. At the Nyali International Beach Hotel, a 170-room luxury facility, a handful of tourists are at the bar while a couple are sunbathing beside the pool, but the hotel is evidently not busy.

“For the last three years it’s been very low,” admitted Tsuma Ndune, a 38-year-old kitesurf instructor who works further down the beach. He said business was roughly a third of what it had been during Kenya’s better days.

In Mombasa, a local cooperative making handicrafts, Akamba, has also seen its turnover halved since 2007, the year when Kenya – once seen as a beacon of stability in East Africa – took a turn for the worse and erupted into violence following disputed elections.

“Most tourists have gone since 2007 and the election unrest, business just hasn’t been the same,” said Akamba’s director Jackson Mwaniki, adding that the global financial crisis had combined to provide a perfect storm for Kenyan tourism.

“Most of the tourists that are coming to Kenya are saying that they have been hit… the purchasing power to them has also gone down,” he said.

The post-election violence of 2007 to 2008 resulted in a 30% drop in tourism over the following year before recovering three years later, according to official figures.

But business dropped in 2012 and appears to have continued its downward trend – amid security fears linked to the war in Somalia and kidnappings along the coastline by Somali gunmen, fears of renewed political violence during the 2013 elections and the Westgate shopping centre attack later in the year.

Tourism is crucial part of Kenya’s economy: according to the most recent figures from 2011, the sector directly or indirectly accounted for 14% of gross domestic product and roughly 700,000 jobs, or 12% of the workforce.

For Tomas Garcia Hertz of Vintage Africa, a Kenyan tour operator offering safari and beach packages, the country has failed to adapt to a punishing international business climate.

“The overall economic situation in our overseas market is not the best. In a way we tend to forget that the economic crisis is still very much alive and many people around the world are scared about their jobs,” he said.

But he said costs and overheads in Kenya have continued to rise – such as a sales tax rise and hikes in national park entry fees – and that competition was tough, especially Tanzania where the Serengeti reserve and island of Zanzibar are cheaper alternatives to the Masai Mara and Mombasa’s beaches.

“Clients worldwide are definitely price sensitive, and when you’re offering them a safari adventure in Tanzania for much less money than Kenya then it obviously becomes a major criteria.”

Park entry fees in Tanzania are now lower than in Kenya – $60 per person per day for the Serengeti compared to $80 for the Masai Mara, which is just across the border.

“If you look at a family of four who wish to stay in the park, you’re talking about a huge amount of money even though you haven’t yet even travelled to the country, you haven’t stayed anywhere, you haven’t eaten, you haven’t been transported,” he said.

Hertz also complained the Kenyan government appeared oblivious to the troubles in the tourism sector.

“One would think that the government is very much aware that this Kenya destination needs a lot of support. I think they have just lost contact with reality on the ground and nobody is taking any measures to correct that,” he said.

“Kenya is making things difficult… to sell Kenya as a destination”.