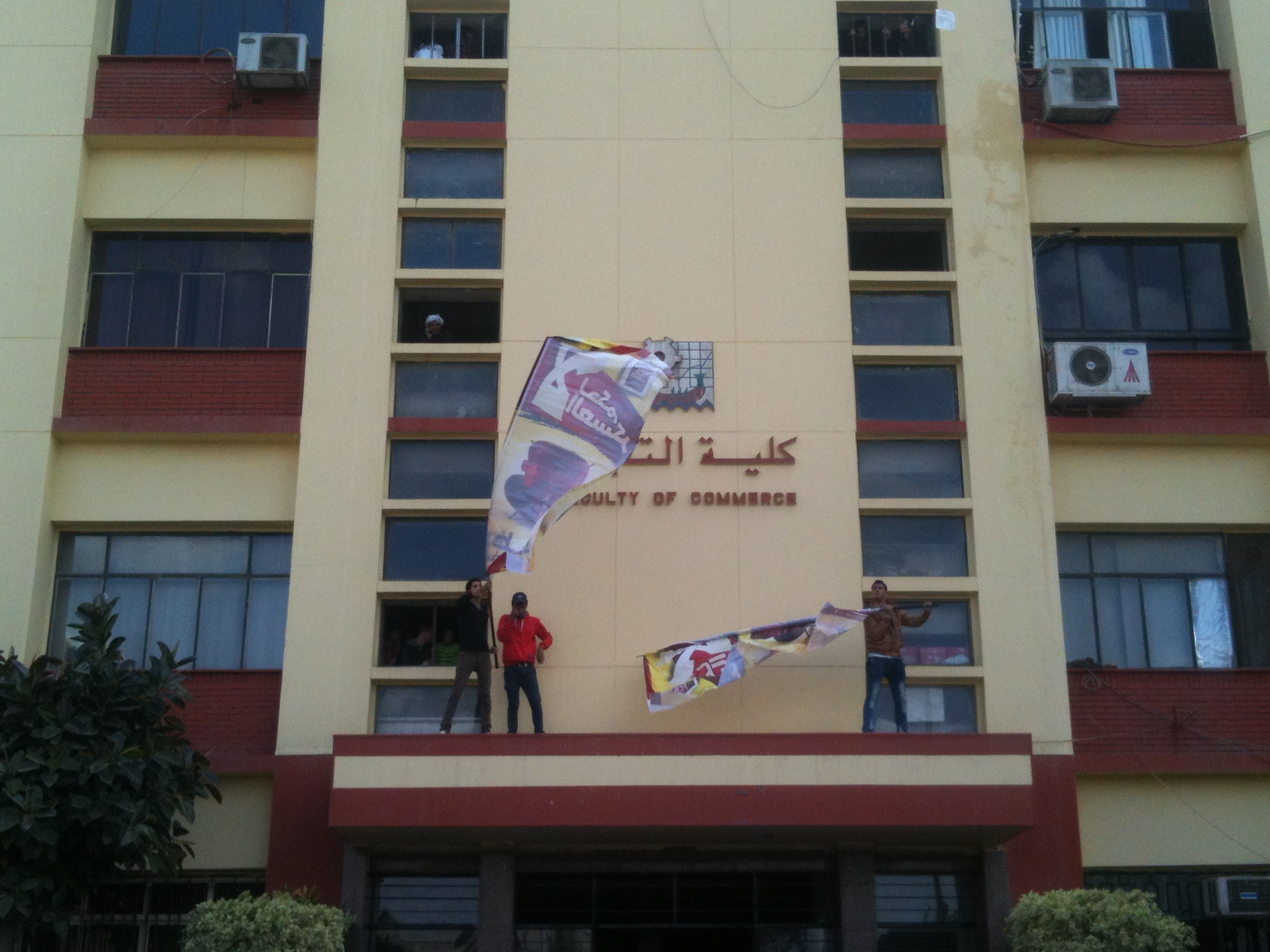 Students Against the Coup (SAC) protested Tuesday inside the building of the Faculty of Commerce at Ain Shams University.

According to Ayman AbdAllah, head of the faculty’s security, the students broke the all the locks of the faculty building, adding that administrative security had locked the doors of different faculties along with the main gates of the main campus.

SAC coordinator at Ain Shams University Hazem Tarek denied these allegations, saying that students were able to enter the faculty through the back door because security had forgotten to lock it.

Tarek challenged university security to come forward with any evidence that would prove the students guilty, remarking that the campus is now monitored with cameras.

During the protests, SAC chanted against the dean of the faculty, security guards, the Ministry of Interior and what they called “military rule.” The students chanted the name of Abdel Rahman Yousry, a student whom they claimed was killed by security forces on campus last January, and Abdel Rahman Farouk, a recently suspended sophomore student at the Faculty of Commerce.

The students chanted and painted graffiti in different parts on campus and inside the building the faculty of commerce.

Dr Tarek Hammad, dean of the Faculty of Commerce, also commented on the incident. “What can we do?” he said. “They are protesting for a student in the Faculty of Computer Science who committed violations that were recorded on cameras and the university administration notified us that [the student in question] had been suspended.”

Hammad explained that the violations of the suspended students varied, but some of them were suspended for writing “profane statements against the faculty administration, the police and the military.”

He added that he had filed an obituary in state run Al-Ahram news paper at his expense for Yousry and postponed the exam that he was taking to the next day. “I asked the students to come forward with any videos proving the death of the student on campus, but they refrained,” he said.

Tarek contested the dean’s statements, saying the students were outraged that the dean was unaware of the suspension of a student in his own faculty. The SAC coordinator added that the dean had known of Yousry’s death but had taken no legal steps to address it.

Bystander students were asked to comment on the situation, but Mohamed Marwan, 23, was the only student willing to do so.

Marwan, a senior student at the Faculty of Commerce, labeled himself as independent and said the students have every right to protest. He opposed the actions of SAC, however, describing them as “vandalism”. Marwan lamented that differences of opinion are not encouraged on university campuses, saying the typical view is one of “‘if you are not with me, then you are against me’.”