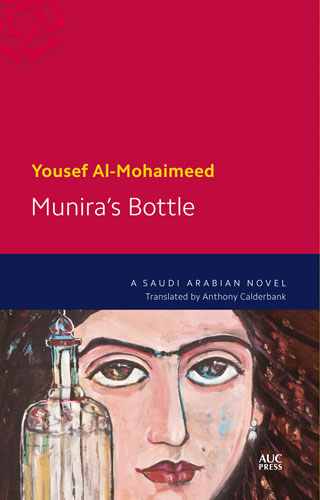 Spirits interfere with a young Tuareg boy when he sets off into the desert to search for his father. While he finds solace on a lost oasis, soon others arrive and, as the years pass, he lives through life and myth alike.

The Libyan author Ibrahim Al-Koni, who is of Tuareg heritage, used the culture’s legends about Anubis to write a novel were folklore collides with modern literature.

The story of Munira, her brother and the many women that she meets in the remand centre where she works offers the reader an insight in the life of women in Saudi Arabia. Munira records the painful stories the women carry in silence on pieces of paper and stores them in a bottle, a repository of pain and secrets.

The Last of the Angels

Kirkuk, Iraq, in the 1950s is the backdrop of the story of three males, Hameed Nylon, who becomes a revolutionary; Khidir Musa, his brother in law, who goes on a quest to find his brothers in the Soviet Union; and Burhan Abdullah, a young boy who finds an old chest that allows him to communicate with angels. While the story starts out humourous, as time passes and the political realities change, so do the lives of the characters.

The Lost Manuscript of Frédéric Cailliaud

Arts and Crafts of the Ancient Egyptians, Nubians, and Ethiopians

Translated and edited by Andrew Bednarski

Frédéric Cailliaud, a 17th Century French naturalist, wrote several books on ancient Egypt that helped establish the then new scientific direction of Egyptology. However, one of his books was never published until now.

In 1815, Cailliaud travelled the ancient routes to the Red Sea, through what is now known as Ethiopia and the eastern and eastern deserts. During his travels, he took note of how people lived, their environment and antiquities. He used watercolours to paint scenes from daily life in ancient Egypt based on what he found on temples and tombs and made connections to life as is went on all around him in the early nineteen century.