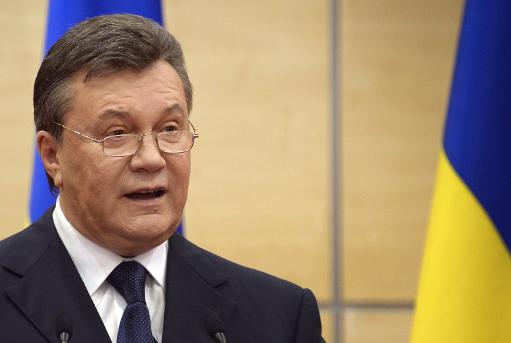 AFP – Ousted Ukrainian leader Viktor Yanukovych on Tuesday said that he was still the country’s legitimate president and commander-in-chief, predicting he would be able to return to Kiev soon.

“I remain not just the sole legitimate president of Ukraine but also commander-in-chief,” he said in his first public appearance in over a week, in the southern Russian city of Rostov-on-Don.

“As soon as the circumstances allow – and I am sure there is not long to wait – I will without doubt return to Kiev,” he added, speaking Russian.

In contrast to his lengthy press conference on 28 February when he re-emerged in Russia, Yanukovych gave only a seven minute statement in a conference hall in Rostov-on-Don, standing in front of several Ukrainian flags.

He then left the stage alone without taking questions.

He reaffirmed his belief that power in Kiev had been taken by a “band of ultra-nationalists and neo-fascists” who he said wanted to start a “civil war”.

He said that presidential elections planned in May would be “absolutely illegitimate and illegal” and he would not recognise the results.

It is not clear what influence, if any, Yanukovych has on Russian policy on Ukraine. President Vladimir Putin said last week he was in theory still Ukrainian president but recognised he had no political future.

Yanukovych told the new pro-West authorities in Ukraine who took over after he fled to Russia last month that “sooner or later, most likely sooner” they would be held responsible for their actions.

“You will be made responsible for the suffering of the people. Ukraine is now going through a difficult time,” he said.

He blamed them for the fact that Ukraine appears about to lose control of Crimea, which is set to be claimed by Russia after a referendum on 16 March.

“Your actions have led to the fact that Crimea is separating and the people of the south and east are demanding respect, even in the face of machine guns,” he said.

“We will get through this trouble, the people who have been deceived by you will see this and the country will rise up and unify,” said Yanukovych.

However, contrary to expectations, Yanukovych made no other reference to the crisis over Crimea in his statement.

There had been repeated rumours in the Russian press over the last week that Yanukovych had suffered a heart attack but he appeared to be in reasonable health, if looking strained and tired.

“I want to say that I am alive,” said Yanukovych in a comment that provoked immediate ridicule on social networks.

“But I cannot say that I feel good as I cannot look at what is going on now in Ukraine without deep and terrible alarm.”

He accused the west of ignoring the “fascist” tendencies of the new authorities in Ukraine.

“Have you gone blind? Have you lost your memory? Have you forgotten what fascism is?”

He said that the presidential elections would be illegitimate as they would proceed under the “total control of extremist forces”.