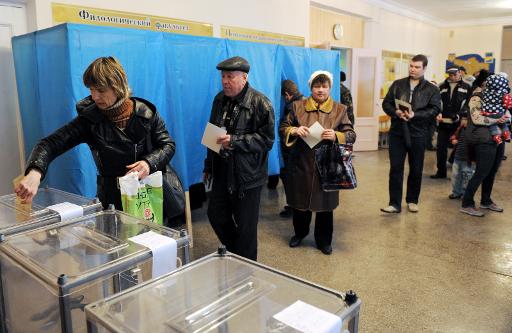 AFP – Crimeans took to the polls on Sunday for a referendum on breaking away from Ukraine to join Russia that has precipitated a Cold War-style security crisis on Europe’s eastern frontier.

Cossacks and self-defence militias were seen patrolling some polling stations and Russian flags were being flown everywhere from city buses to convoys of bikers roaming the streets.

Ukraine’s new government and most of the international community except Russia have said they will not recognise a result expected to be overwhelmingly in favour of immediate secession.

“This is a historic moment, everyone will live happily,” Sergiy Aksyonov, the local pro-Moscow prime minister, told reporters after casting his ballot in the regional capital Simferopol.

“We will celebrate this evening,” Aksyonov said, after a man waving a blue-and-yellow Ukrainian flag and demanding it be put up inside the polling station was pushed away by security guards.

The Black Sea peninsula is inhabited mostly by ethnic Russians and has been seized by Russian forces over the past month after Ukraine’s uprising, plunging US-Russia ties to their lowest point since the fall of the Berlin Wall in 1989.

“The result has been pre-planned by the Kremlin as a formal justification to send in its troops and start a war that will destroy people’s lives and the economic prospects for Crimea,” he said.

Some Crimeans who requested anonymity said they were planning to spoil their ballots in protest and there was a call on social media for people to stay at home and cook vareniki – Ukrainian dumplings – instead of going out to vote.

Accredited journalists including AFP were prevented from entering some polling stations in the port city of Sevastopol and the regional capital Simferopol, and around 65 people were seen voting in Sevastopol before the polls opened.

Crimean officials said foreign observers were present but the Organisation for Security and Co-operation in Europe (OSCE) declined an invitation to monitor saying it was not official because it did not come from Ukraine’s national government.

“We want to go home,” said 57-year-old Tatiana Ischinka after casting her ballot in Sevastopol as Russian patriotic songs blasted across the city – home to Russia’s Black Sea Fleet for 230 years.

In Bakhchysaray – the main centre of Crimea’s native Muslim Tatar community, which is urging a boycott of the referendum – mostly ethnic Russians were seen coming to vote.

“We have waited years for this moment,” said 71-year-old Ivan Konstantinovich, who raised his hands in victory after voting.

“Everyone will vote for Russia,” he said.

Voters can choose to become part of Russia or retain more autonomy but stay in Ukraine – a vote for the status quo is not an option.

Preliminary results were expected to be announced soon after the polls close at 8:00 pm (1800 GMT).

Rehearsals for planned celebrations on Sunday have included the slogan “We are in Russia!” beamed onto the government building in Simferopol, leaving no doubt as to the expected outcome.

Preparations to become part of Russia – a process that could take months – are to begin this week if the referendum result is pro-Moscow.

Pro-Russia authorities and Moscow say the referendum is an example of self-determination like Kosovo’s decision to leave Serbia but Washington says it cannot be democratic because it is taking place “under the barrel of a gun”.

Tensions have escalated in mostly Russian-speaking parts of eastern Ukraine ahead of the referendum.

Three activists have been killed in the eastern cities of Donetsk and Kharkiv in the run-up and pro-Moscow supporters have called for similar separatist polls in other Ukrainian regions.

Russian troops and pro-Moscow militias took control of the strategic peninsula soon after Yanukovych fled Ukraine for Russia in the wake of three months of deadly protests in Kiev.

Russian senators have also given the go-ahead for President Vladimir Putin to invade Ukraine when he wants, citing the need to defend ethnic Russians against ultra-nationalist radicals.

Ukrainian military bases in the region are surrounded by militias but there has been no armed Russia-Ukraine confrontation so far.

There have however been several attacks on journalists and pro-unity activists condemned by Amnesty International as “extremely worrying”.

It is also unclear what will happen to the thousands of Ukrainian military personnel currently based in Crimea after the secession vote.

The diplomatic wrangling and brinksmanship over Crimea have been startling, including a confrontation at the United Nations Security Council in which interim Prime Minister Arseniy Yatsenyuk asked: “Do the Russians want war?”

Successive rounds of negotiations between US Secretary of State John Kerry and his Russian counterpart Sergei Lavrov have failed and Kerry appeared to break diplomatic protocol by not showing up for planned talks in Moscow.

Russia’s foreign ministry said late Saturday after the latest talks that Lavrov had told Kerry that Kiev “should rein in ultra-nationalist and radical groups who are terrorising people who think different, Russian-speaking people and our compatriots”.

While the West has been powerless to stop Crimea’s annexation, Russia faces a painful round of sanctions against top officials that Washington and EU nations are set to unveil on Monday and it could be ostracised or even ejected from the Group of Eight (G8) leading world powers.

Local authorities are calling this a “Crimean Spring” but many Crimeans are concerned about a possible legal vacuum and economic turmoil in their region.

One immediate worry is about the availability of cash and there have been long queues outside banks with Crimeans rushing to take their money out.

Crimea would not automatically join Russia after the vote and Ukraine’s government has said it cannot survive since it depends on electricity, energy and water supplies from the mainland.

“Whether we stay with Ukraine or go with Russia, it’s understandable that people are concerned,” said Aleksiy Yefremov, head of the New People of Crimea student association.

“We do not have enough information. Do we listen to officials in Kiev or to the local authorities?”

‘Confrontation and Roaming’ Theatre’s 2021 plan to be revealed Wednesday