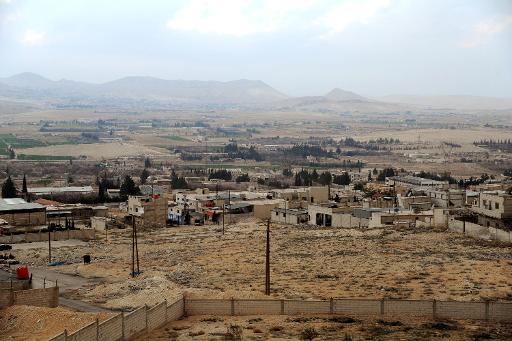 A military source said “13 rebel chiefs leading operations are dead”, adding there were “many deaths among the insurgents”.

State television broadcast images of the town from its outskirts and said troops had advanced two kilometres (more than a mile) inside the town towards a roundabout.

Yabrud is a key rebel supply route and their last stronghold in the Qalamun region along the border with Lebanon and on the highway between Damascus and third city Homs.

The latest battle illustrates the intractability of the conflict that began on 15 March, 2011 after popular uprisings that toppled dictators in Tunisia and Egypt.

Protests erupted in Syria’s southern city of Daraa after teenagers were arrested over graffiti declaring: “The people want the fall of the regime.”

President Bashar al-Assad’s regime cracked down on the protests, civilians took up arms, soldiers began to desert and an insurgency became full-scale civil war after the regime bombed the central city of Homs in February 2012.

Two years later, the conflict appears to have reached stalemate, with some predicting it could last another 10 or 15 years.

Rebels control large swathes of Syria, but are fighting both the regime and an Al-Qaeda-inspired group they once welcomed.

Loyalist forces hold the more densely populated regions, and are advancing south of Damascus, in the Qalamun region and in Aleppo in the north, seeking to protect the coast, major towns and key roads.

Syria’s mostly exiled political opposition has secured Western recognition but is largely ignored by rebels on the ground.

On Saturday, Syrian National Coalition chief Ahmed Jarba urged international backers of the opposition to make good on promises to supply the rebels with better weapons.

“We renew our request to the friends of the Syrian people to immediately keep their promises… to do with qualitative weapons,” he said.

“Our fighters are not only facing regime forces and their allied gangs,” he said in a speech in Istanbul.

“They are also facing extremist gangs and are cleaning our house of terrorist mercenaries, particularly the Islamic State of Iraq and the Levant (ISIL).”

“Where is your humanity?” and “Your silence is killing us” banners said.

In Paris, the message “Avec les Syriens” (“With the Syrians”) was projected on the Eiffel Tower.

Syria’s opposition failed to achieve progress in talks with the regime in Geneva earlier this year, demanding that Assad step down.

Instead, Assad is now gearing up for elections in mid-2014 that he is expected to win.

On the ground, both sides have been accused of abuses.

The human cost of the conflict has soared, with nine million people forced from their homes, creating the world’s largest displaced population, according to the UN’s refugee agency.

More than 2.5 million Syrians are registered or awaiting registration as refugees in neighbouring countries, and in excess of 6.5 million people are displaced inside the country.

The exodus has strained neighbouring countries, including small Lebanon which is housing nearly one million Syrians.

“To see Syrian children drowning in the Mediterranean today after fleeing the conflict… is something totally unacceptable,” he said.

Aid groups warned that a generation risks being “lost forever,” with millions of children deprived of health care, education and security.

Experts say neither side can score a decisive military victory.

“Rebel infighting has helped Assad take back some areas, but the advances are not dramatic enough to tip the balance and allow him to reclaim the rest of Syria,” Aron Lund, editor of the Carnegie Endowment’s Syria in Crisis website, told AFP.