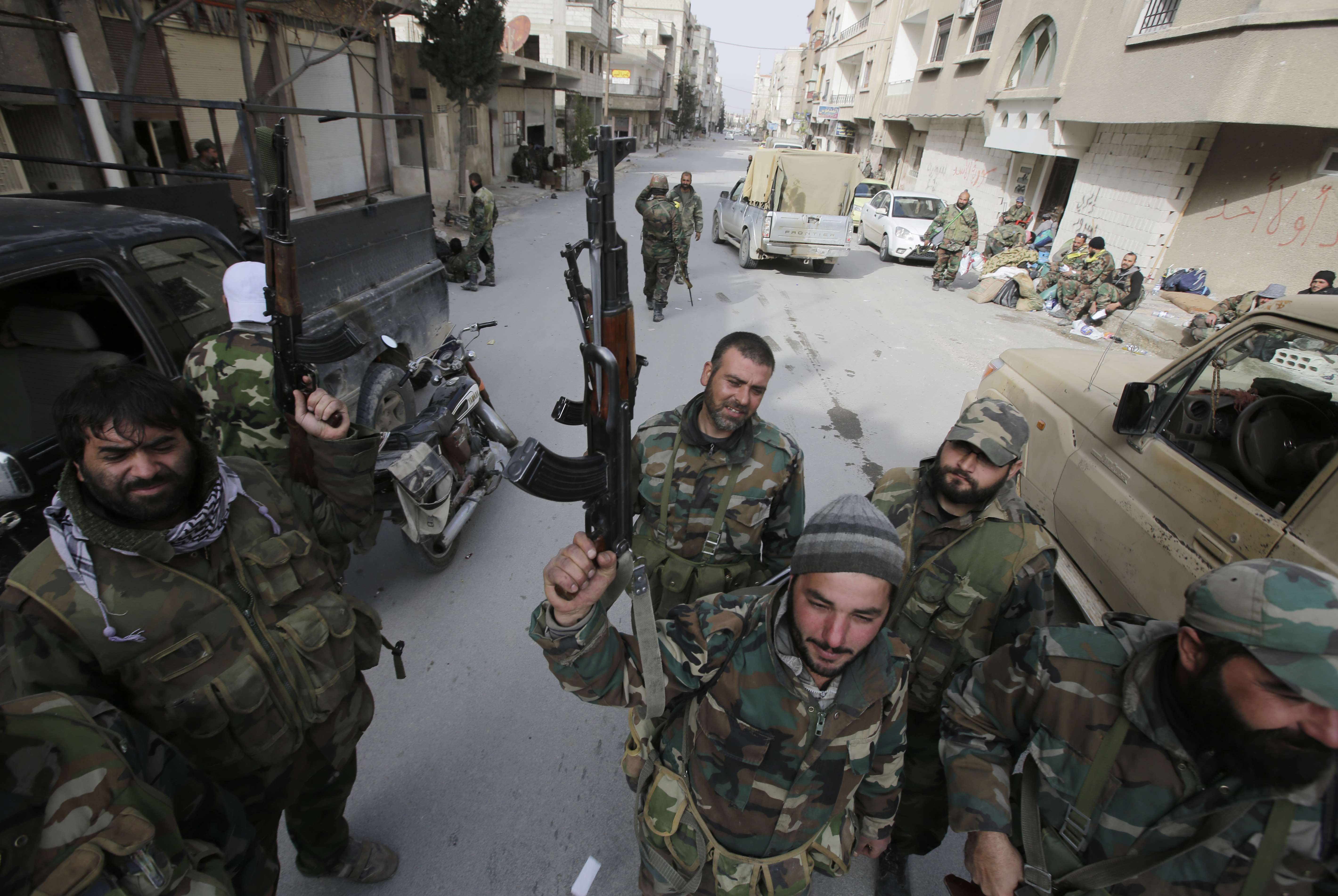 AFP – Syrian regime forces were Monday readying an assault on the last rebel-held areas in the Qalamoun mountains, strategically located on the Lebanese border, after overrunning key opposition bastion Yabrud.

The capture on Sunday of Yabrud by Syrian troops and fighters of Lebanon’s Hezbollah marked a significant setback for the rebels as it severs their important supply lines from across the Lebanese border.

“The army will under the battle plan launch operations in all areas where terrorists are to be found,” said a security source in Damascus, using the regime’s term for rebels.

These included Rankus, south of Yabrud, and Ras al-Maarra and Flita, northwest of the town.

“The aim of the army operation is to entirely secure the border and to close all corridors to Lebanon,” the source added.

An AFP reporter entered Yabrud, north of Damascus, after the army on Sunday declared it had seized full control of the town.

Exhausted Syrian soldiers sat in the streets after seizing the town in fierce clashes with the support of battle-hardened fighters from Shi’a militant group Hezbollah and pro-regime militiamen.

“It was a very difficult battle, possibly the most difficult we have faced,” a soldier who identified himself as Abu Mohammed told AFP in Yabrud’s central square between puffs from a water-pipe.

A source close to Hezbollah in Lebanon’s Bekaa Valley told AFP that the battlefield victory came after a Hezbollah commando raid on Yabrud during which 13 rebel leaders were killed.

Among those slain, said the source, was Abu Azzam al-Kuwaiti, believed responsible for kidnapping 13 nuns and holding them in Yabrud for some three months before they were freed on March 10 in a rare prisoner swap.

The killing of the leaders left the rebels in disarray, the Hezbollah source said.

The fighting along the border has sparked a fresh flight of civilians into Lebanon, according to the UN High Commissioner for Refugees.

“So far 150 families have crossed the border since Yabrud fell,” said the UNHCR’s Lisa Abu Khaled.

“NGOs there were on standby so they have handed out food, blankets, etc, and the UN plans to register the arrivals this week,” she added.

In a spillover of violence, a suicide car bombing killed four people late Sunday in a Hezbollah-held area in the Bekaa near the Syrian border, a Lebanese security source said.

Those killed were two Hezbollah members, including a local official, and a woman and her husband who later died from their wounds, said the source.

The attack was claimed by Al-Nusra Front in Lebanon, which described it as a “quick response to the bravado… of the party of Iran [Hezbollah] for their rape of Yabrud”.

Earlier, another Sunni extremist group, Liwa Ahrar al-Sunna, had also taken responsibility for the attack, describing it as “revenge for Yabrud”.

The fall of Yabrud comes after months of Syrian army operations in the Qalamoun region. Late last year, the army captured a string of nearby towns before turning its sights on Yabrud.

The town was once home to some 30,000 people, including a Christian minority, and had been a rebel bastion since early in the Syrian uprising that began in March 2011.

Yabrud is a strategic prize because of its proximity to the highway and the Lebanese border, across which the mostly Sunni rebels have smuggled fighters and weapons.

Hezbollah’s involvement in Syria has prompted bomb attacks by extremist groups against areas in Lebanon sympathetic to the Shi’a movement, killing mostly civilians.

The group and Lebanese security forces have said many of the car bombs used in those attacks originated in Yabrud.

The army’s capture of the town came a day after Syria’s conflict, which has killed more than 146,000 people, entered its fourth year.