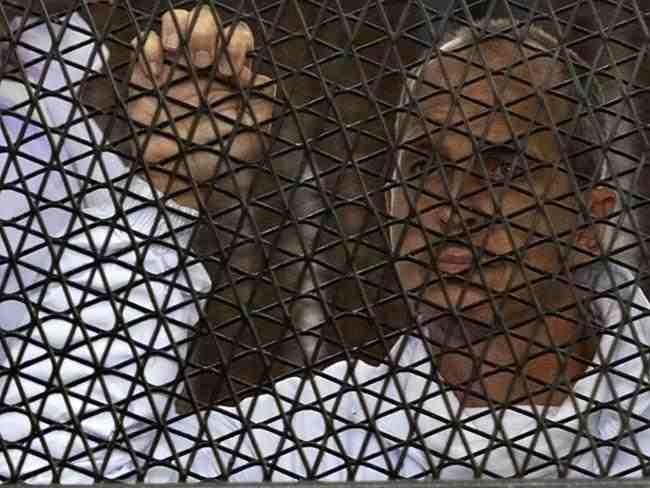 Interim President Adly Mansour has expressed his “heartfelt sympathy” in a letter to the family of imprisoned Al Jazeera journalist Peter Greste, in reply to a letter sent by the family.

The trio, along with 17 others who were indicted by the prosecutor general and dubbed the ‘Marriott Cell’, have been charged with spreading false news and aiding an illegal terror organisation.

In the letter, dated 17 March and sent to Daily News Egypt by a member of the Greste family, the interim President said he “received with heartfelt sympathy the family letter concerning the case of your son Peter.” He explained that as a father himself he expressed his “understanding of the prevailing emotions of distress and anguish” felt by the family.

Mansour stressed the “independence of the judiciary authority” and that Greste’s rights “are guaranteed by the law.” He said that he would “spare no effort to work towards the speedy resolution of the case, in a fashion consistent with the law, and guarantees the reunion of the family in the near future.”

In response to the letter, Greste’s brother Michael told Daily News Egypt that the acknowledgement of the family’s original letter was “comforting” and “encouraging”. He added, “We take it how it comes and see what happens.”

Greste is “holding up, in good spirits and healthy” said his brother, having visited him in Tora prison last Saturday. Michael Greste said that despite Mansour’s assurance of a “speedy” conclusion there is no indication that Greste will be freed anytime soon. “He has to prepare himself; there isn’t an end date and you have to prepare for the worst.”

Speaking about the other defendants in the trial Michael Greste said, “Our [the Greste family’s] primary concern is to get Peter out and there is no doubt we want the case to be finalised.” He added that press freedom is a “fundamental right” and “we hope all of them are found not guilty”.

The defendants in the trial have appeared in court twice and have maintained their innocence. The first session was adjourned due to the absence of a translator. The defendants claimed they had been tortured and denied medical care when the trial resumed on 5 March, according to AFP.

Greste is the only foreign journalist in custody, while three others who have also been charged in the case are currently outside of Egypt. This includes Dutch journalist Rena Netjes who was allowed to leave the country following negotiations between Dutch embassy officials and the Egyptian authorities. Al Jazeera has never employed her.

The Egyptian authorities have stressed on numerous occasions that the case is a judicial matter being handled by the prosecution.

The case has drawn international condemnation and widespread support from the global media community and further afield. At the end of February demonstrations were held in 40 locations worldwide under the banner “Journalism is not a crime”. Protesters covered their mouths in a symbolic gesture of solidarity with the imprisoned journalists.

The Qatari Al Jazeera news network has been viewed in Egypt as supporting deposed President Mohamed Morsi. The defence team have stressed that the editorial policies of the Arabic language Al Jazeera Mubasher Misr and Al Jazeera English are independent of each other.