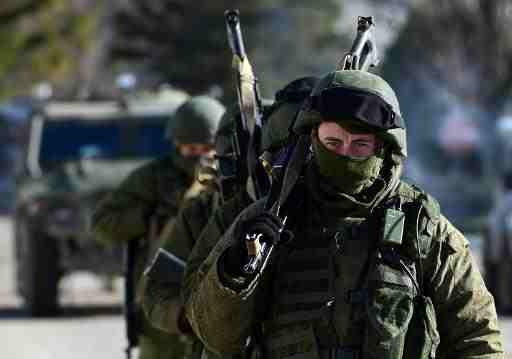 A day after the US and EU launched sanctions touted as the most severe against Moscow since the end of the Cold War, Putin informed parliament of Crimea’s request to join Russia and tasked authorities with approving an agreement for the Black Sea region to become part of the country.

The Russian strongman was due to address both houses of parliament at 1100 GMT after he signed a decree on Monday recognising Crimea’s independence.

Russia now appears set to present the absorption of Crimea as a just response to a request made by a state that is already independent, albeit recognised by no one but Moscow.

The seizure of Crimea by pro-Russian forces following the ousting of Ukraine’s pro-Moscow president Viktor Yanukovych last month has been condemned around the world.

But the prospect of Russia’s international isolation is unlikely to deter an increasingly defiant Putin who is set to base the justification for the de facto annexation of Crimea on the region’s weekend referendum where almost 97 percent voted to split from Ukraine.

It is the first time since World War II that Moscow is expanding its borders and represents the most radical redrawing of the map of Europe since Kosovo’s 2008 declaration of independence from Serbia.

The lush peninsula has been the base of Kremlin navies since the late 18th century and only became part of Ukraine in 1954 when it was gifted by Soviet leader Nikita Khrushschev.

With a population of some two million, Crimea has long been seen as a favourite vacation destination and held a great hold over the Russian psyche.

Patriotic fervour has soared in Russia, with tens of thousands expected to hold a state-supported rally in Moscow with the slogan “We are together”.

A majority of Russians back Putin on Crimea and many shrug off the international condemnation, saying a greater measure of self-reliance could be a boon for the country.

“For the first time over the 20 years Russians have raised their head and sensed their inner strength,” said Olga Burtseva, a 52-year-old Muscovite.

Putin’s approval ratings have jumped to 72 percent on the back of the success of the Sochi Winter Olympics and his decision to send troops to Crimea following an uprising that ousted the Moscow-backed Yanukovych last month.

The asset freezes and travel bans announced by the United States and the European Union appear not to be enough to prompt Putin to back down.

Deputy Prime Minister Dmytry Rogozin ridiculed sanctions against him on Twitter and parliament lawmakers adopted a statement urging Washington and Brussels to blacklist them too.

A defence ministry source told AFP that there was relief within the navy that the future was now assured of the Russian Black Sea fleet at a Crimea base that Moscow was leasing from Ukraine.

But the mood was far from jubilant among economists and businesses who fear Putin’s policies and the threat of further sanctions will inflict lasting damage on Russia’s economy.

“Complete uncertainty is scary,” one banking analyst told AFP, asking not to be named. “It is impossible to say what will happen next.”

– US warns of further sanctions –

A big question remains whether Russia will stop at Crimea or whether it also has its eye on Russian-speaking regions of south and eastern Ukraine.

“If Russia continues to interfere in Ukraine, we stand ready to impose further sanctions,” Obama warned.

“These are by far the most comprehensive sanctions applied to Russia since the end of the Cold War — far and away so,” said a senior US official.

Those targeted under Obama’s executive order will see assets and interests in the United States or under US jurisdiction blocked and Americans will be barred from doing business with them.

US Vice President Joe Biden arrived in Poland for talks with regional allies including the presidents of Estonia, Latvia and Lithuania.

Sanctions were also imposed by Canada and Japan, which denounced Russia’s “deplorable” move.

British Foreign Secretary William Hague called for dialogue, stressing that “for the UK and her allies the Crimea remains part of Ukraine”.

UN Secretary General Ban Ki-moon warned a “deterioration of the situation will have serious repercussions for the people of Ukraine, the region and beyond”.

Diplomats in Brussels said EU and Ukrainian leaders would on Friday sign the political portion of a landmark pact whose rejection by Yanukovych in November sparked protests that led to his fall.

Moscow has refused to recognise the pro-West government that took power in Ukraine after the fall of Yanukovych, saying it was discriminating against Russian citizens and speakers.

In Kiev, Ukraine’s Prime Minister Arseniy Yatsenyuk pledged Tuesday to do his best to build “truly partner-like and good neighbourly ties” with Moscow.

“Russian is as much a language of Ukrainian patriots as Ukrainian,” he said.

The undaunted government of Crimea took several steps Monday aimed at severing its ties with Kiev.