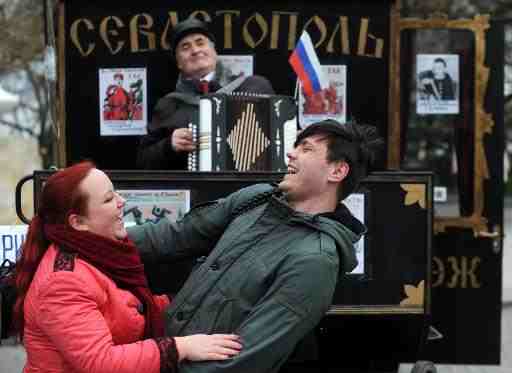 AFP— Crimeans’ decisive choice in favour of Kremlin rule leaves Ukraine’s new leaders with few viable ways to reclaim the peninsula but is likely to deepen their budding ties to the West.

The Black Sea region that Moscow gifted to Kiev during the Soviet era but seized back in the days after the February 22 fall of Ukraine’s pro-Kremlin regime is now at the heart of the most dramatic East-West showdown since the height of the Cold War.

Sunday’s referendum effectively confirms what has already happened in the diamond-shaped cape of two million people — Russian separatists run everything from government buildings and television centres to the mail delivery service.

But Ukraine and its Western allies have limited options to stop Russian President Vladimir Putin from putting Crimea under what they see as his illegal control.

One option would be piling pressure on Russia in the hope that it could reverse course.

Initial confusion in the West about how best to stand up to the Kremlin’s overt show of power has been replaced by a more focused drive that should see Washington and EU leaders unveil painful measures against Putin’s closest allies on Monday.

Russia also faces token punishments aimed at blighting its international prestige: its coveted seat among the Group of Eight (G8) powers is in peril and its right to host the 2018 football World Cup is facing a fight from some feisty US senators.

But perhaps the most painful and lasting blow came on Saturday when Russia was abandoned by top ally China during a crunch UN Security Council vote on the Crimean referendum’s legitimacy.

But the Western pressure has so far done little to sway Putin and has only seen his ratings hit a two-year high amid a burst in Russia of patriotic pride.

On Sunday the Russian leader told US President Barack Obama that he intended to respect the referendum that in his eyes was fully legal and “in line with the norms of international law and the UN charter.”

If Ukraine contemplates recovering Crimea by force it would face a David and Goliath battle.

Its conventional army of 130,000 soldiers — half of them conscripts with ageing equipment — is dwarfed by a 845,000-strong Russian force that has the backup of nuclear arms.

And calls by hawkish US voices such as Senator John McCain to provide Ukraine with military assistance are unlikely to gain much currency among Western leaders who are forced to respond to increasingly isolationist moods at home.

Yet Ukraine can still make things unpleasant for Russia by refusing to move its troops out of Crimea — an irritant the Kremlin may have to accept.

Kiev does have one potent weapon in its arsenal that comes in the form of economic pressure.

Crimea is a devastated region with poor infrastructure that relies on the mainland for everything from the water used by its farmers to the electricity and gas supplied to homes.

The more nationalist voices in Kiev have suggested that the best way to thwart Russia’s ambitions was by effectively starving Crimea into submission through a cut to its most vital supplies.

“Crimea’s access to gas, electricity, water and food staples is in danger — and Russia will not be able to compensate,” said Penta institute analyst Volodymyr Fesenko.

But any such step would likely face a fierce response from Moscow that could include a steep hike in tariffs for imports from Ukrainian factories and a further rise in the price its consumers pay for Russian natural gas.

The upside to the Crimea crisis is that it has accelerated the move by Kiev’s new authorities to pull Ukraine out the Kremlin’s orbit and put the nation of 46 million in the Western sphere of influence.

The US and the EU have both sped up financial assistance and political support to Kiev.

EU and Ukrainian leaders are now expected on Friday to sign the political portion of an Association Agreement whose rejection by the old team in November sparked the first wave of protests.

Western powers are also discussing an aid package for the economically struggling nation that could fill in for a massive Russian bailout whose payment Putin suspended with the pro-Moscow team’s fall.

The danger for Kiev is that too strong or too rapid a push West will only further alienate the Russian-speaking southeastern swathes of the splintered nation whose roots to Moscow stretch back centuries.

Some eastern parts of Ukraine such as Donetsk are already seeking their own referendums on joining Russia. Others are threatening to follow suit.

Yet Kiev political analyst Vitaliy Balla thinks that Russia’s seizure of Crimea has pushed the moderates in Ukraine further into the pro-Western camp.

“The occupation of Crimea has united Ukrainians in many ways,” he said.