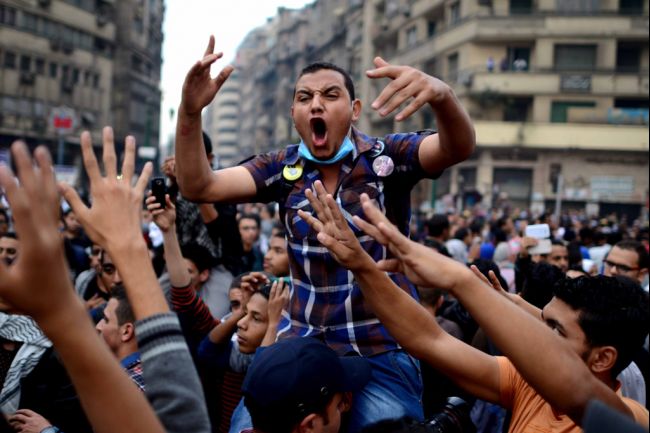 The Association for Freedom of Thought and Expression (AFTE) released its first weekly report on rights violations on Egyptian university campuses Tuesday, citing what it calls a “tremendous amount” of violations as well as an overall tension between administrative security and students during the first week of classes.

“The programme works to document and monitor violations of the rights and freedoms of university students,” the statement says, and only publishes information verified independently by networks of students.

Students also voiced various concerns regarding prospects for further violent confrontations between administrative security, which has taken a greater role in policing campus, and Central Security Forces (CSF), which are often stationed outside campus. CSF forces are allowed to enter campus at the invitation of administrative security if marches escalate into clashes.

A vast majority of the violations occurred during Students Against the Coup (SAC) marches, which were dispersed by either administrative security on campus or by the Ministry of Interior, which was sometimes asked to intervene when clashes spiralled out of control.

This week’s report covered 12 national universities in addition to entailing the state of security measures, violations against students, and the overall mood with regards to the twice-delayed second semester.

At Menufiya University, a number of students were arrested during the extended mid-year break, leading to the reorganisation of opposition ranks within the university. Remaining students organised silent marches and vigils which “targeted” the faculties of Agriculture, Medicine, and Electronic Engineering during the first three days of the semester. Amr Badrawi, the SAC spokesperson for Menufiya University, said that the Ministry of Interior will not seek direct confrontation with the students.

Faculty of Engineering student Mohamed Ayad noted that SAC protesters should not bring Molotov cocktails and fireworks to protests, as it gives CSF soldiers a reason to intervene and enter the campus. Ayad suggested that such actions would only lead to more arbitrary arrests.

The president of the university’s student union, Ahmed Abu Sayar, added that all student unions within the university are pressing for the release of all detainees arrested from campus as Faculty of Electronic Engineering dean Dr Sayeed Halafawi issued a decree for the investigation of 19 students with regard to participation in SAC protests.

According to the report, dozens of students at Mansoura University were injured on 12 March when clashes between administrative security led to CSF involvement. Allegedly, campus security attempted to disband a SAC march and detained two students, which lead to SAC protesters burning three motorcycles that belonged to local security guards. Clashes escalated to volleys of tear gas from CSF soldiers and a response of fireworks and stones from the campus side.

Beni Suef University also witnessed violent clashes during the first week of classes. The report details one event in which a march organised by SAC on 9 March reached a head when students gathered in front of a administration building to demand the release of detained students. The protesters then attempted to leave campus but were kept inside by CSF, who fired tear gas, and unknown assailants who fired birdshot towards the march.

Minya University protests also ended in violence when SAC-organised protests on 11 March called for the release of detainees. Students allegedly closed the main gate of the university and blocked traffic in front of campus, which led to a response by CSF soldiers who were joined by “passers-by”.

Allegedly, students affiliated with the SAC movement were found with several Molotov cocktails and fireworks. The fear of further violence led administrative security to commence searching cars that entered campus for objects that could be used in clashes.

At Banha University SAC organised protests which revolved around the faculties of Engineering, Science, Agriculture and Veterinary Medicine, calling for the release of students detained during protests. Sixteen have already been arrested this semester, and the head of the Medical Student Union was suspended before classes commenced in March.

According to the report, Mahmoud Shalabi predicted: “The second semester will be full of arrests and arbitrary dismissal of students due to the repressive practices of [university administration].”

Ahmed Ibrahim, head of the Union of Medical Students, added that tightened security will have an impact on the freedom of student activity within the university and that the Student Union will take part in any escalatory actions calling for the release of detained students.

Six students were banned from the Alexandria University Faculty of Engineering for three years, and another student from the Faculty of Arts was also banned three years for allegedly assaulting an administrative security guard.

The students also protested in solidarity with striking workers; 10 March featured a Rabaa march, which was the biggest protest of the year at Alexandria University.

SAC continued protests on the first day of classes calling for the release of detainees as well as the return of heightened security to campus. Students also carried a coffin through campus in support of the “martyr” Amr Khalaf.

Various other universities saw protests without violence, including Aswan and Zagazig universities, which staged SAC protests demanding the release of detainees and the increased security presence on campus. Students at Zagazig also distributed fliers urging solidarity with striking doctors and Gaza.

Reactions of students at Aswan University are indicative of the present situation on campuses nation-wide, as Ali Abdel-Dayem claims studies were delayed twice “to wait for the government to rule the court the return of university guards”.

Ahmed Shehatah added: “Demonstrations have no negative impact on the educational process because the student movement is not aimed at disabling studies but necessary for students to claim their rights.”

Menufiya and Zagazig students, according to the report, voiced concerns of a repeat of violence and anxiety regarding the possibility of continued violence. Ahmed Essam, a member of the Misr Al-Qawia party, said: “I’m afraid of the increase in tension between students and police,” adding that increased security will negatively affect the students’ lives.

Protests during the first semester of the school year caused near-constant disruption to campuses, as students aligned with SAC organised marches and vigils and blocked traffic, which frequently garnered a response by CSF forces.

At the time of print, clashes at Beni Suef, Cairo, Alexandria and Al-Azhar universities were ongoing, with unconfirmed reports of two dead. CSF forces fired tear gas to disperse the various protests, even firing gas into the campus of Cairo University.

The Cairo University SAC spokesman said Wednesday’s protest was held to denounce the death sentence of Ibrahim Azab, who was charged with being part of a terrorist group that tried to target ships in the Suez Canal.