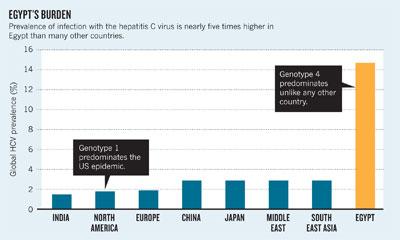 Reuters – Gilead Sciences, facing mounting criticism over the high price of its new hepatitis C pill Sovaldi, has offered to supply the medicine to Egypt at a 99% discount to the US price.

The high price tag in America prompted questions from US lawmakers on Friday, after US health insurers said they were seeking help from state health officials to foot the bill.

Gilead said it was “pleased to have finalised an agreement” for the introduction of Sovaldi in Egypt, which has the highest prevalence rate of hepatitis C in the world.

“We believe Sovaldi could have a major impact on public health in Egypt by significantly increasing the number of people who can be cured of hepatitis C,” Gregg Alton, head of corporate and medical affairs at Gilead, said in an emailed statement.

Egyptian health minister Adel El-Adawi said Cairo had struck a deal with US-based Gilead for the government to buy Sovaldi for $300 for a one-month box, according to a recent report on the state news agency MENA.

That would imply a cost of $900 if Sovaldi is used as part of a 12-week drug regimen, although the cost would be higher if it was used for 24 weeks, which is also an option based on different drug combinations.

El-Adawi said Gilead’s offer would apply to Sovaldi supplies used in government clinics, adding that access programmes would start in the second half of 2014, following completion of registration procedures in Egypt.

Sovaldi is in the vanguard of a wave of pills which could cure the liver-destroying disease in millions of people worldwide, or even eradicate it entirely. But that will only happen if the new therapies are affordable enough to allow widespread use.

Nowhere is the problem more acute than in Egypt, which has the world’s highest prevalence of the virus, following the use of poorly sterilised needles in campaigns dating back to the 1970s to stamp out the parasitic disease schistosomiasis.

Like HIV, hepatitis C (HCV) can be spread through blood, often via contaminated needles.

The World Health Organisation estimates that more than 150 million people worldwide are chronically infected, most of them in developing countries, putting them at risk of cirrhosis and liver cancer.

Other companies such as Johnson & Johnson, AbbVie, Bristol-Myers Squibb and Merck & Co are also developing oral treatment regimens for HCV that have shown dramatic results in clinical trials, while reducing the need for debilitating interferon injections.

Doctors and industry analysts believe the new drugs will transform HCV treatment – and prove hugely profitable. In the developed world, they are tipped to become major blockbusters, with consensus sales forecasts for Sovaldi alone standing at $9.1bn in 2017, according to Thomson Reuters Pharma.

But the risk of a gulf in access between patients in the rich and poor parts of the world is causing alarm among health campaigners who warn of a potential re-run of the battle over HIV drugs in Africa more than a decade ago.

Medecins du Monde, a non-profit group that provides medical care around the world, highlighted Egypt as a country in dire need of the new hepatitis C drugs in a report this week.

Gilead has also said it plans to license Sovaldi to a number of Indian generic pharmaceutical manufacturers, which would be able to sell lower-priced copies of the medication.