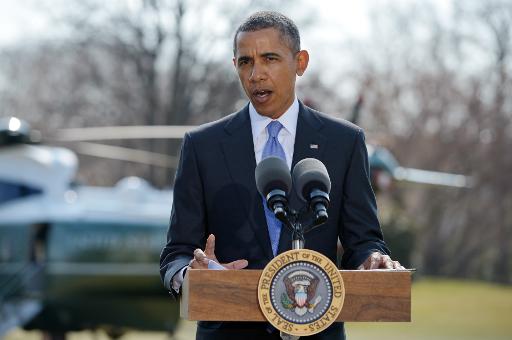 AFP – US President Barack Obama has urged Lebanon to hold elections as planned in May, despite tensions aggravated by the conflict in neighbouring Syria, the American embassy in Beirut said Saturday.

President Michel Sleiman’s mandate ends on 25 May and there are worries a successor will be hard to find because of disagreements between Lebanon’s pro- and anti-Syria regime blocs.

In a telephone call to Salam, Obama “urged that the upcoming presidential elections be held on time and in keeping with the Lebanese constitution”, a statement from the US embassy said.

It said Obama recognised “the difficulties facing Lebanon due to the conflict in Syria,” and “emphasised the importance of all parties observing Lebanon’s policy of disassociation”.

Obama also thanked Salam for hosting Syrian refugees, nearly one million of whom have fled to Lebanon.

Parliament approved Prime Minister Tammam Salam’s government on Thursday after protracted negotiations with the military over the role of powerful Shiite movement Hezbollah.

Dominated by Damascus for 30 years until 2005, Lebanon is deeply divided over the conflict in Syria.

Hezbollah and its allies back Syrian President Bashar Al-Assad, while Lebanon’s Sunni-led opposition supports the uprising against his rule.