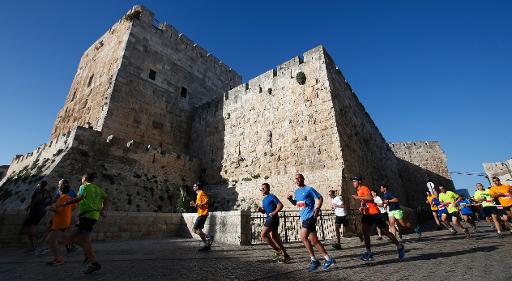 AFP – Some 100 Palestinians tried to disrupt the annual Jerusalem marathon on Friday, police said, as activists called for a boycott of the race through the Holy City.

Police arrested four of them and dispersed the rest “with ease,” she said, adding that the race had “continued as normal”.

Some 20,000 people participated in Friday’s marathon, in which Kenyan runner Ronald Kimbly raced to victory.

Pro-Palestinian activists oppose the Israeli-organised marathon, particularly its route through Arab east Jerusalem, which was occupied by Israel during the 1967 Six-Day War and later annexed, in a move never recognised by the international community.

“The marathon is used to cover up Israel’s image around the world while acting as a smokescreen to its illegal annexation of and gradual ethnic cleansing of Palestinians from the occupied city,” said a statement from a leading Palestinian movement to boycott Israel over its alleged human rights violations.

Police had restricted access to the flashpoint Al-Aqsa mosque compound on the day of the marathon, which bisects a small part of the Old City near where the compound is located.

Israel considers Jerusalem its “indivisible” capital, and the Al-Aqsa compound is known to Jews as the Temple Mount, their holiest religious site.

The Palestinians insist east Jerusalem be the capital of their future state.