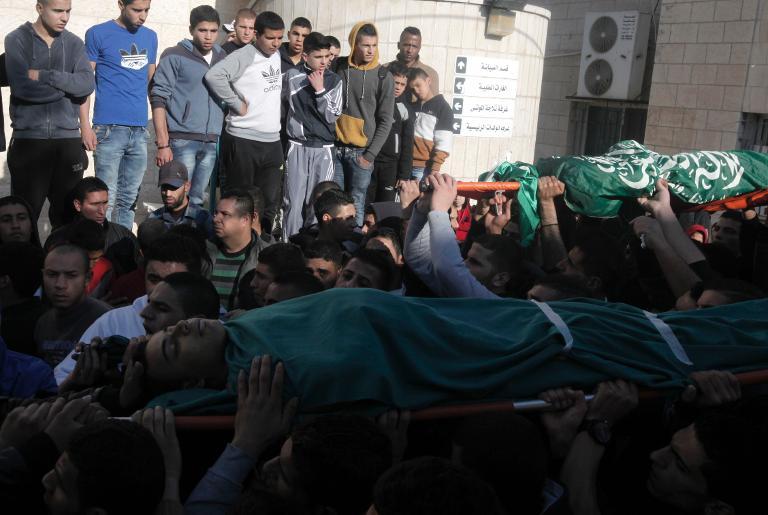 AFP – Three Palestinians were killed in the Jenin refugee camp in the West Bank early on Saturday after Israeli soldiers launched an operation to arrest a militant, Palestinian officials said.

Medical and security sources said that two of those killed were militants and the third was a civilian. They said 14 Palestinians were also wounded, with two in critical condition.

The Palestinian sources said Israeli soldiers entered the camp in the northern West Bank city to arrest Hamza Abu Alheja, 20, a member of the military wing of Hamas, the Ezzedine al-Qassam Brigades.

Fire was exchanged, and “other gunmen gathered around the house” to help Abu Alheja, including Mohammad Abu Zena, 19, an Islamic Jihad militant who was killed along with Abu Alheja, the medical and security sources said.

A civilian named as Yazan Jabarin was also killed, the Palestinians said, and announced a day of mourning and a strike in Jenin.

“He had been previously involved in a terrorist attack in the region, and was in the advanced stages of the preparation of further attacks against IDF [Israeli military] personnel and Israelis,” Lerner told reporters.

He said security forces shot Abu Alheja only after he shot and lightly wounded two Israelis while trying to escape from the building in which he had holed up.

“In the meantime, more armed operatives were alerted to the location. Palestinians began to shoot and throw explosive devices at the troops, and as a result we have two more killed,” Lerner added.

Lerner noted the ongoing security coordination between Israel and the PA, but said the Jenin operation “was an independent IDF and special forces mission”.

“They [PA security forces] don’t really operate in the Jenin refugee camp, and that was why we were required to do as such,” he said, adding that the army did not foresee any imminent escalation there.

Israeli Defence Minister Moshe Yaalon said the incident “saved lives” since it “thwarted a terror attack that had already been planned and was supposed to target Israelis”.

A spokesman for Hamas, which rules the Gaza Strip, called the incident a “crime” that “shamed” the PA.

“We call on the [PA] security forces to end security coordination with the Israeli occupation and leave the resistance to act freely,” Sami Abu Zuhri said in a statement.

“The Palestinian people cannot tolerate this – the West Bank is boiling over because of the crimes of the Zionists,” senior Islamic Jihad official Nafez Azzem said.

“The United States and Israel want to force the Palestinians and the entire region to surrender, but Gaza and the West Bank resist this,” Azzem said.

A spokesman for Abbas condemned the “continuing escalation against the Palestinian people” and blamed Israel.

“We call on the US administration to move quickly to prevent a general collapse in the region,” Nabil Abu Rudeina said.

On Thursday, he said US-sponsored peace talks with Israel have reached an impasse because of Jewish settlement activity.

The talks are on the brink of collapse, with Washington fighting an uphill battle to get the two sides to agree to a framework proposal to extend the negotiations to the year’s end after a 29 April deadline.

The violence in Jenin came as Palestinians in Gaza prepared to mark the tenth anniversary of the killing of Sheikh Ahmed Yassin, spiritual leader of Hamas, in an Israeli air strike.

Saturday’s deaths brought to nine the number of Palestinians in the West Bank killed by Israeli forces this year, according to an AFP tally.