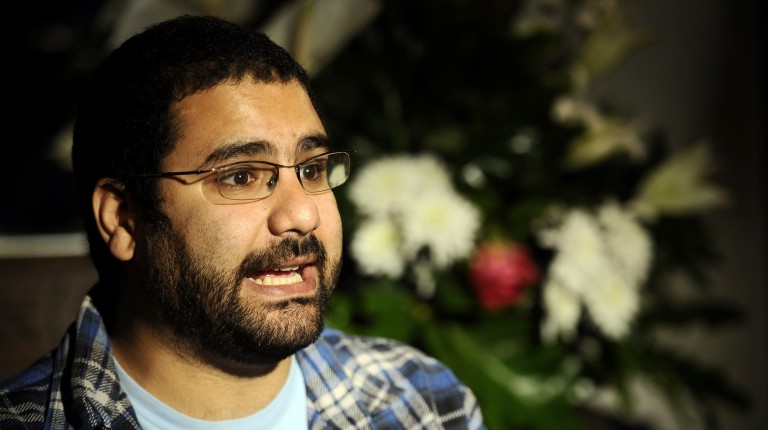 On Sunday famed blogger and activist Alaa Abdel Fatah and Ahmed Abdel Rahman were ordered released on EGP 10,000 bail pending a 6 April trial for staging a demonstration outside the Shura Council building on 26 November.

Charges against Abdel Fatah, Abdel Rahman, and 23 other  defendants include blocking roads, assembling illegally, protesting without a permit, and acquiring weapons during a protest.

The demonstration, which the defendants described as peaceful, protested Article 198 of the constitution, which allows for the military trial of civilians under certain circumstances. The protest was dispersed by security forces using water cannons and tear gas, as prescribed by Article 12 of the Protest Law.

More than 50 people were arrested at the demonstration. Many were released on the same day, but 24 were held.

Abdel Fatah, a member of the rights group No Military Trials for Civilians, was arrested days after the protest on 28 November when police raided his home without a search warrant, according to a statement released by family and friends. Both Abdel Fatah and his wife were beaten by police during the arrest, they reported.

While 23 of the defendants were released on bail on 4 December, Abdel Fatah and Abdel Rahman were ordered to remain in custody.

While Abdel Fatah is a renowned activist, human rights lawyer Mahmoud Belal  said Abdel Rahman was simply a passerby who was carrying a knife because of his work at a hotel. Abel Rahman was walking home from his shift, and stepped in when he saw police officers beating female protestors, said Belal.

“When the current arrest warrant was issued, Abdel Fatah stated publicly that he would turn himself in on Saturday, going so far as to formally inform the public prosecutor’s office by telegram and registered letter. But the police violently raided his home instead,” read the statement.

A Friday statement from the Observatory for the Protection of Human Rights Defenders, a coalition of several rights groups, demanded that authorities release Abdel Fatah unconditionally “as well as all human rights defenders currently in detention, since their detention is arbitrary as it seems to only aim at curtailing their human rights activities.”

“The Observatory denounces the arbitrary detention and judicial harassment of [the defendants], as they seem to only aim at sanctioning their human rights activities and call for their immediate and unconditional release,” read the statement.

Other rights groups, including Amnesty International and the Arab Network for Human Rights Information (ANHRI), have also denounced the defendants’ trial and detention, with ANHRI calling it “a continuation of violations of the Egyptian police, and aggression against the most basic rights of citizens.”

The Protest Law has been the butt of much controversy since its inception in fall 2013. Activists and rights groups have cried foul to the law, which requires that demonstrations receive approval from the local police department more than 24 hours ahead of time.

The law allows security forces to use water cannons, batons and teargas to disperse unauthorised protests. If the aforementioned prove fruitless, security forces have the right to the “gradual use of force”, where they can fire warning shots or sound bombs, use rubber bullets and then use birdshots. If the protesters resort to firearms, Article 13 entitles security forces to respond in proportionate measures according to their right to “legitimate self-defence”.