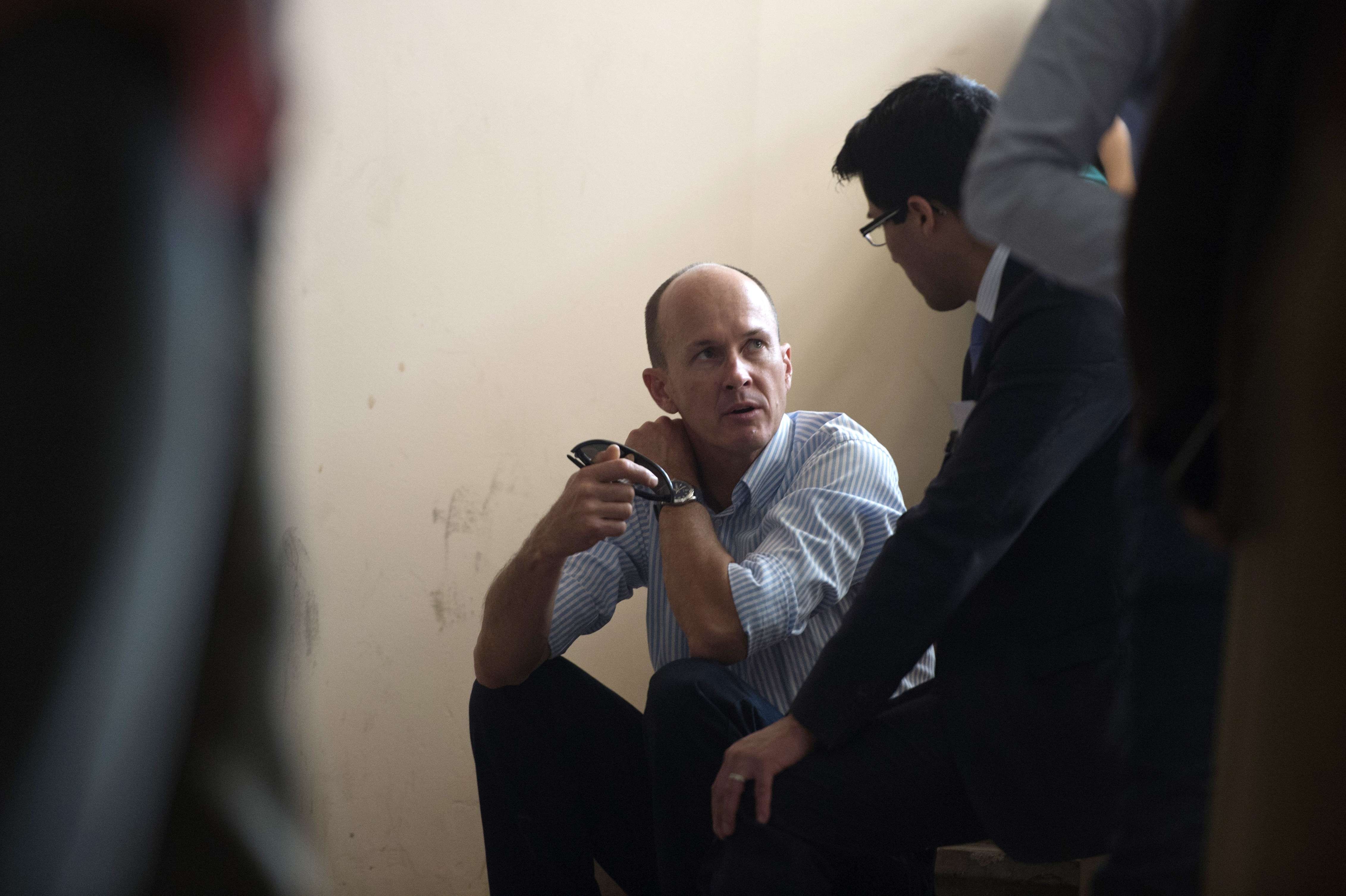 Imprisoned Al Jazeera journalists Mohamed Fadel Fahmy, Peter Greste and Baher Mohamed will face trial for the third time on Monday, but family member told the Daily News Egypt that the men remain in high spirits despite the harsh conditions they face in Cairo’s Tora Prison.

The brothers of both Greste and Fahmy were able to visit the men in prison on Sunday, and reported that the men are still positive even with their trial looming.

“[Mohamed] is coping and managing. He gets very anxious as the court session is approaching,” said Fahmy’s brother Adel Fahmy.

“He is always hoping the court sessions are not too far apart,” added Adel Fahmy. “He wants an expedited trial, as they all do, and he wants a fair trial.”

On Saturday, The Guardian reported that Fahmy was allowed his first visit to a civilian hospital for a serious shoulder injury sustained shortly before his 29 December arrest. The injury has limited the mobility in Fahmy’s arm to the point where he is only able to move it a few centimetres.

Adel Fahmy said that his brother received a CT scan and an MRI and they are awaiting the results to assess if the damage will be permanent. Fahmy’s injury will require surgery and physical therapy for any hope to recover full function of his arm, said Adel Fahmy.

Fahmy’s visit to a hospital is the latest indicator that conditions are improving for the men, who were initially held in solitary confinement without medical attention upon their arrest.

Since February, the trio have been held in the same cell, and since last week they have been allowed books, magazines and newspapers. Initially, they were only allowed local newspapers, added Adel Fahmy, but as of Sunday, they were granted international papers and foreign magazines.

Fahmy a dual citizen of Canada and Egypt, and Greste, an Australian, have recently been allowed regular visits with their respective embassies.

“We just can’t throw enough superlatives at the Australian embassy [in Cairo],” said Greste’s brother Michael Greste. “They’ve been nothing short of miraculous. They’ve been tenacious and dogged in their appeals to try and improve the conditions of the imprisoned.

“It hasn’t just benefited Peter and his colleagues. From my understanding, it’s benefited the whole wing where he’s housed.”

Greste’s family received a letter from interim President Adly Mansour last week, in which he expressed his “heartfelt sympathy” for Greste and his family, and assured them that he would “spare no effort to work towards the speedy resolution of the case, in a fashion consistent with the law, and guarantees the reunion of the family in the near future.”

“We’re cautiously reassured [by the letter],” said Michael Greste. “We like to think it will play a part in expediting the case, but we’ll just have to wait and see what the results are after tomorrow’s court appearance.

“Steps are being made forward, sometimes they’re very small steps, but there’s progress.”

Fahmy’s family received a similar phone call from the presidency on Thursday in response to a letter Fahmy’s father sent. Though they were not told any specifics about the trial, said Adel Fahmy, the phone call helped facilitate his brother’s visit to the hospital.

Dubbed the “Marriott Cell” by the prosecution, Fahmy and Greste were arrested at the Zamalek Marriott where they were using two rented suites as a base of operations, while Mohamed was arrested the same night at his home in suburban Cairo.

At the end of February demonstrations were held in 40 locations worldwide under the banner “Journalism is not a crime”. Protesters covered their mouths in a symbolic gesture of solidarity with the imprisoned journalists.