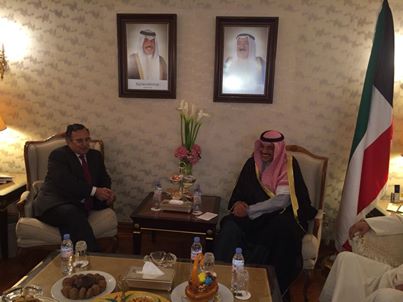 Kuwaiti Minister of Foreign Affairs Sheikh Sabah Khaled Al-Sabah welcomed Fahmy and stressed his anticipation to have a Kuwaiti named as president of the 21-country league.

Fahmy also met with Emirati minister of state Sultan Al-Jaber, with whom he discussed “overall bilateral relations between the two countries, as well as regional issues of common interest”.

Before his trip to Kuwait, Fahmy spent Saturday morning, the second and final day of his trip to Beirut, discussing both regional security concerns and the situation in Syria with politicians and army officials.

The group discussed “the regional crisis associated with the current situation in Syria” and “the relationship between the political forces and the community”.

Fahmy then met with General Jean Kahwaji, commander of the Lebanese armed forces to “to discuss the prospects [military] of cooperation between the two countries”.

Lebanese stability has suffered greatly since the outbreak of war in Syria, especially after the Lebanese militant group Hezbollah sent soldiers across the border to fight with Bashar Al-Assad. Cross-border attacks on Lebanese, often Hezbollah-related targets, have become shockingly frequent.

The war in Syria, which has sent hundreds of thousands of Syrian refugees streaming across the border to Lebanon, has threatened to destabilise the entire area. The United Nations High Council on Refugees estimated that by the end of 2014 more than 1.5 million Syrians will have sought refuge in Lebanon.

The war in Syria entered its fourth year on 3 March.