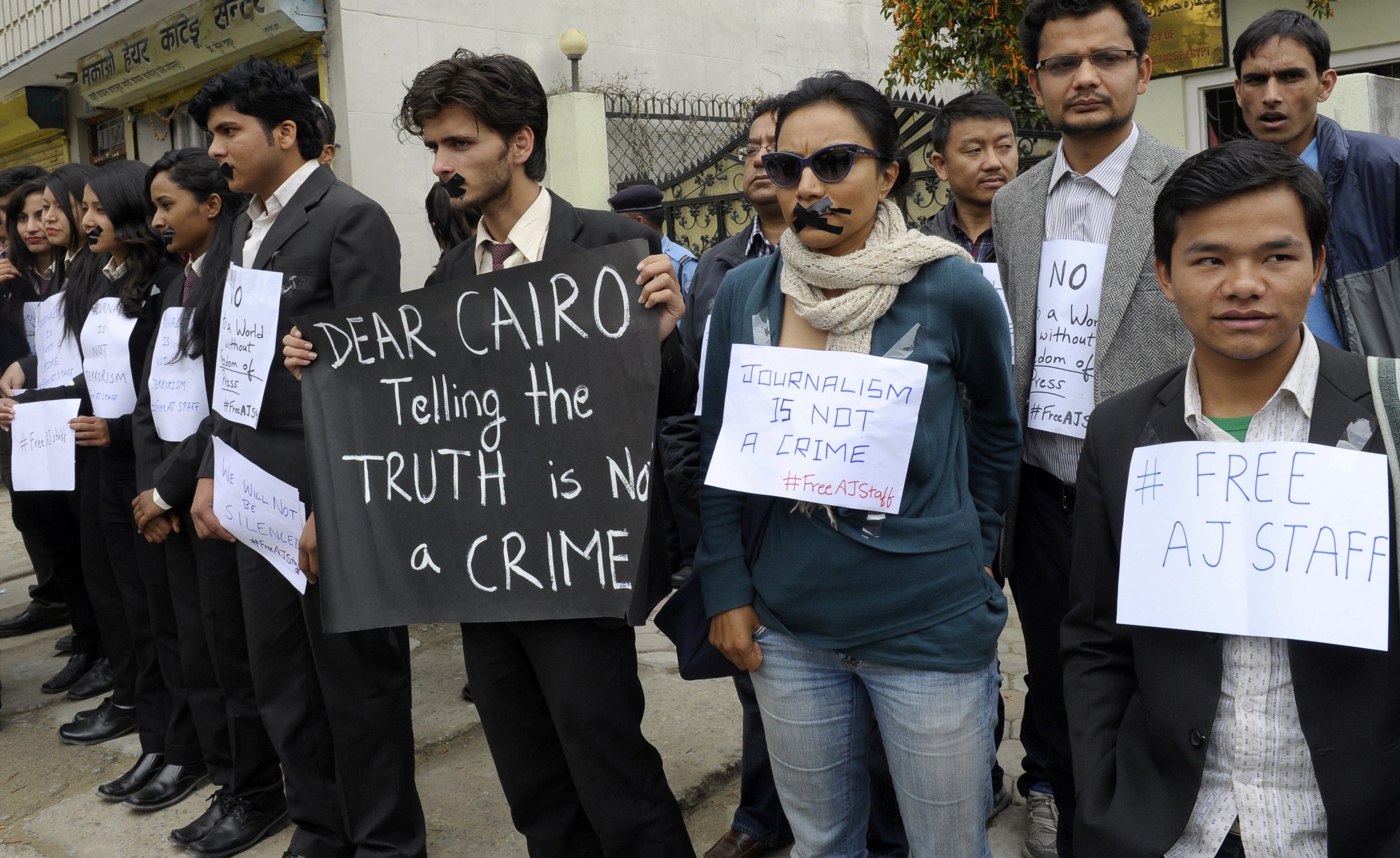 On Monday three journalists from Al Jazeera English were denied bail after a lengthy court session in Cairo’s Tora Prison, where they were being tried on charges that include spreading false news and belonging to a terrorist group. Their trial was then adjourned for a third time, and will resume 31 March.

Canadian-Egyptian bureau chief Mohamed Fadel Fahmy, Australian correspondent Peter Greste, and Egyptian producer Baher Mohamed are among 20 defendants on trial for allegations that they “created a terrorist media network” specialised in producing fabricated video news stories, which then aired on Al Jazeera and CNN in an effort to tarnish Egypt’s reputation abroad, depicting Egypt as in the midst of a civil war.

Monday marked the third time the trio appeared in court. On 20 February, the case was postponed because the court did not have a translator for Greste, and was further adjourned on 5 March.

The shorter length between court dates was “the only bright spot” of the day, said Adel Fahmy, adding that he spoke to his brother and Fahmy feels hopeful that the prosecution’s case is “falling apart.”

Of the 20 accused, only 8 of the journalists, including Fahmy, Greste and Mohamed, are currently in custody, reported state-run Al-Ahram. The rest are being tried in absentia.

Among the 20 defendants, 16 are Egyptian citizens and 4 are foreigners.  Greste, along with Britons Sue Turton and Dominic Kane, have worked as correspondents for Al Jazeera English in Cairo.  A fourth defendant, Dutch journalist Rena Netjes, has never worked for the broadcaster.

The other five defendants are students arrested on 31 December and 2 January. According to a press statement by the Muslim Brotherhood-aligned group Students Against the Coup, “the students have never once met [the journalists] before their trial, a fact that has been verified by the journalists and the students themselves in one of their court appearances.”

Dubbed the “Marriott Cell” by the prosecution, Fahmy and Greste were arrested from two rented suites at the Marriott Hotel in Zamalek, which they had been using as a base for operations, on 29 December. Egyptian producer Mohamed was arrested on the same night from his house in suburban Cairo.

At the end of February demonstrations were held in 40 locations worldwide under the banner “Journalism is not a crime”. Protesters covered their mouths in a symbolic gesture of solidarity with the imprisoned journalists.

Al Jazeera Arabic reporter Abdullah Elshamy, not listed in the criminal complaint, has been detained without charge since being arrested while covering the dispersal of the pro-Mohamed Morsi sit-in at Rabaa Al-Adaweya Square on 14 August.  He has been on a hunger strike since 21 January in protest of his imprisonment.

Egypt has experienced an increasingly severe crackdown on voices of dissent. The Committee to Protect Journalists has ranked Egypt the third most dangerous country for journalists after Syria and Iraq, and it ranked 159th out of 180 in the 2013 Reporters Without Borders “Press Freedom Index”.