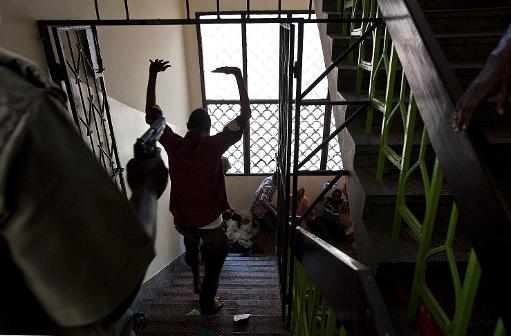 Federal prosecutor Jean-Marc Trigaux told DH newspaper that the men – a Belgian, a Frenchman and an Algerian – arrived in Brussels on Saturday morning to join a trial in which they were being prosecuted in absentia.

Mustapha Bouyahbaren, Rachid Benomari and Mohamed Said had been serving a one-year jail sentence in Kenya, after being found guilty in July 2013 of illegally entering the country.

Kenyan authorities authorised their extradition to face terrorism charges as part of a trial involving 19 Belgians which began in Brussels on 10 March.

Belgian public prosecutors have requested a 20-year jail sentence for Benomari, a Belgian citizen, claiming he was the mastermind of the operation, and five years’ jail each for Said and Bouyahbaren.

Another of the 19 accused, Brussels hairdresser Hassan Khafi, was extradited from Kenya last year and has since admitted to the court that he left Belgium in 2011 in an attempt to join Somalia’s Shebab rebels who have links to Al-Qaeda.

The men have been charged with either fighting alongside jihadist groups in Somalia, having attempted to go to Somalia or Syria to take part in combat or having supported a Belgian-based recruitment operation.

All 19 face the charge of “belonging to a terrorist group”.

The Brussels trial, which is taking place under heightened security, comes amid mounting concern over the number of Belgians believed to be travelling to Africa, Syria and the Afghan-Pakistani border to fight alongside jihadist groups.

The fear is that, upon their return to Europe, the now trained and experienced militants could help terrorist groups and boost recruitment.