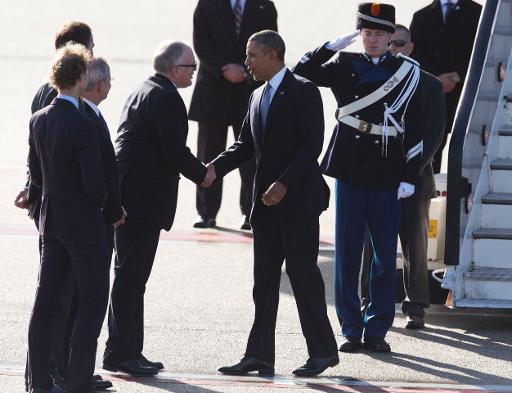 AFP – US President Barack Obama on Monday vowed Western unity in punishing Moscow for annexing Crimea, ahead of crisis talks that could see Russia excluded from the G8 club of rich nations.

In Ukraine itself, the country’s acting president announced that its troops had been given orders to withdraw from Crimea after the fall of another military base to Kremlin troops.

“Europe and America are united in our support of the Ukrainian government and the Ukrainian people, we’re united in imposing a cost on Russia for its actions so far,” Obama told journalists at Amsterdam’s Rijksmuseum.

Obama then headed to The Hague where he has called an emergency Group of Seven summit to discuss what steps to take in the worst East-West standoff since the Cold War.

Russian troops have rapidly overrun the flashpoint Black Sea peninsula since the fall of a pro-Moscow government in Kiev a month ago.

“The national security and defence council has reached a decision, under instructions from the defence ministry, to conduct a redeployment of military units stationed in the Autonomous Republic of Crimea,” acting Ukraine president Oleksandr Turchynov told lawmakers in the face of the latest seizure.

A senior official in the pro-Russian regional government later said that all troops loyal to Ukraine had left their bases in Crimea.

A top NATO commander had warned Sunday that the Western military alliance was carefully watching massive Russian troop formations on the eastern border of Ukraine that could theoretically make a push across the vast ex-Soviet country at any point.

Paratroopers and armoured personnel carriers stormed the naval base in Feodosia in eastern Crimea in the early hours of Monday, with vehicles seen leaving the base carrying Ukrainian marines whose hands had been tied.

Russia’s takeover of Crimea, which it views as a reunification, has forced Western leaders to rethink their relationship with Moscow after a post-Cold War period in which they sought to usher Russia into the broader international community.

With Russia massing what NATO has described as a “very sizeable” force on its border with Ukraine, there are fears that President Vladimir Putin is hungry for more Ukrainian territory.

The growing crisis will dominate the summit in The Hague originally set up to discuss nuclear security.

Russian Foreign Minister Sergei Lavrov is to meet US Secretary of State John Kerry on the sidelines of the Nuclear Security Summit (NSS) for what may be their most tense talks to date.

It will be their first meeting since Washington imposed financial restrictions on the most powerful members of Putin’s inner circle for their decision to resort to force in response to the fall of Ukraine’s pro-Kremlin regime after three months of sometimes deadly protests.

Kerry has already warned that Moscow risks losing its coveted place among the G8 because of the Crimea crisis.

British Prime Minister David Cameron said leaders from Canada, France, Germany, Italy, Japan and the United States – minus current G8 chair Russia – must discuss the permanent expulsion of Russia from the group, which it was admitted to in 1998 as a reward for choosing a democratic post-Soviet course.

Ukraine’s Western-backed leaders have voiced fears of an imminent Russian invasion of the eastern industrial heartland, three weeks after the Kremlin sent troops into the heavily Russified peninsula before sealing its annexation Friday.

Some other former Communist bloc nations fear for their security in the face of Russian expansionism, and Obama reiterated NATO’s solemn obligation to mutual defence.

“No one should ever question the commitment of the United States to the security of Europe,” he told the Dutch Volkskrant newspaper on Monday, referring to NATO as “the strongest and most effective alliance in human history.”

He said sanctions on the Russian economy would also impact the global economy.

“And if Russia continues to escalate the situation, we need to be prepared to impose a greater cost.”

Dutch Prime Minister Mark Rutte insisted on Sunday that the G7 meeting, due to wind up Monday evening, would not detract from the aims of the two-day nuclear summit.

Leaders of 53 countries are gathering for the third NSS, a brainchild of Obama, aimed at preventing a terrorist nuclear attack and reducing the world’s non-military nuclear materials.

World leaders should be free on Tuesday to discuss securing the world’s stocks of nuclear material to prevent a group like Al-Qaeda acquiring a nuclear or so-called ‘dirty’ bomb of conventional explosives wrapped in radioactive material.

Nuclear security is central to Obama’s political legacy and in 2009 he called nuclear proliferation “one of the greatest threats to international security”.

The final NSS is planned in Washington in 2016.